The 2012 Ryan Mone Memorial hockey tournament this past weekend at the Martha’s Vineyard Arena featured some spectacular play by talented Island youth hockey teams and their visiting opponents.

Liam Marek, Will Brugiere, and Oliver Lively each scored in the second frame to tie things up. But Southeast Connecticut went ahead with a goal in the second period and exploded with four goals in the third to put things away. Brugiere scored another goal in the final period.

Tournament organizer Chris Brown said it was a well-played and exciting game. “It was a back-and-forth game, good play on both sides, very competitive, with the home team coming back from three goals to tie the game in the second period,” he said. “You can’t ask for more in a championship game.”

In the Squirts division, the Martha’s Vineyard White team also made it to the championship game Sunday. Facing off against Tri-Valley, they lost 5-0 in another well-played game.

Earlier in the tournament, Martha’s Vineyard White team played Martha’s Vineyard Purple. The two teams skated to a 2-2 tie in a closely matched contest. Hunter Meader and Cabot Thurber scored for the Purple team, and Aiden Marell scored twice for the White team, both times on an assist from Joe Serpa.

In the opening round on Friday, the Martha’s Vineyard Squirts Purple team beat the Tri-County Saints from Mansfield by a final of 8-3, with Hunter Ponte scoring a hat trick.

In the Mites Division, Martha’s Vineyard skated to a 5-5 tie with Shore Shore in the first round. Brugiere had a hat trick in the game, while Mike Wallace and Richie Combra also scored.

Brugiere had four goals in the win, and Eli Gundersen had a pair of goals. Also on Saturday the Martha’s Vineyard Squirts White team defeated Tri-County by a final of 4-1, with four players — Aiden Marell, Josh Dix, Hoffie Hearn, and Aiden Araujo — scoring goals.

Also on Saturday, The Martha’s Vineyard Squirts purple lost to Tri-Valley, with Hunter Meader, Cabot Thurber, and Hunter Thurber scoring goals. “It was an exciting tournament. A lot of our players look forward to this tournament all year and they played really well,” Mr. Brown said.

On the final day of the tournament on Sunday, the Martha’s Vineyard Purple team of the Squirts took on Tri-County in the consolation game and won 7-1, with Hunter Ponte astonishingly scoring all seven goals.

The Islanders skate against Gateway twice this weekend at Hetland Arena in New Bedford. 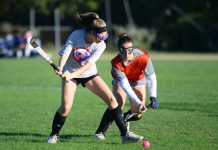 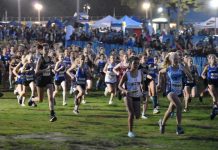 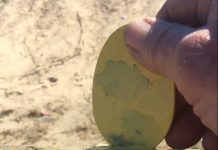