Longtime Martha’s Vineyard Regional High School boys tennis coach Ned Fennessy quietly passed a major milestone earlier this month, even though many people – including his players – were not even aware of it. With the win over Coyle-Cassidy in Lakeville on Friday, April 13, Coach Fennessy notched the 250th win of his career.

Fennessy said he took his players out for pizza to celebrate after reaching the milestone. “I told them: you guys just won me my 250th match,” he said. “They were excited, but they just kept munching away.”

Coach Fennessy said that never in million years did he think he would reach 250 wins. When he started coaching in 1991 he initially said he would only do it for only four years, so he could take a freshman class through four years until they graduated. But he just couldn’t bring himself to leave.

“The kids grow on you, and it was something I didn’t want to give up,” he said. “You get a chance to see these young men mature as young adults, both on the court and off, and that was a real joy. It just got to be fun, and I am happy I was able to be a part of these kids’ lives.”

With his 80th birthday fast approaching, the coach says he has no immediate plans to hang up his racket, Looking back after 22 years, he said he is just as proud of his players’ academic accomplishments as their athletic feats. Eleven of his players this year made honor roll the last marking period, and three made high honors. His teams consistently maintain a grade point average over 3.0, and several years ago he coached a team with a cumulative grade point average of 3.7.

“From my perspective, that’s just as important as their physical development,” the coach said. “I’ve always been lucky to have smart kids who are good tennis players, but I’ve always thought the game of tennis attracts intelligent athletes — it’s as much a thinking game as a physical game.”

This year the coach has a deeply talented team that is almost a lock to qualify for the state tournament and improve on last year’s record of 15-3.

Coach Fennessy’s 250th win was one of the sweetest of his career to be sure, although his 251st win Tuesday against Cape Cod Academy (CCA) may rank right up there.

The breakthrough win at MVRHS came down to an exciting duel at number-one doubles between the Vineyarders’ Natty Schneider and Jackson McBride and CCA’s Jon Haggarty and Oliver Rogers. With the other games already decided, a crowd gathered around the cages to watch the last match.

The Island duo won the first set 6-4, dropped the second 3-6, and prevailed in the third and final set, 6-3, to seal the win for the Vineyarders. It was the first time the Vineyarders have beat CCA in seven years, during which the two teams have forged a heated rivalry.

The simmering rivalry provided the backdrop on Tuesday for what coach Fennessy said was one of the most exciting matches he has ever been a part of.

“It was nip and tuck there for a while; it could have gone either way,” he said. “All the other matches were over and a crowd gathered around the court to watch the number-two singles match — which you don’t see often in high school tennis. It was exciting stuff, and it’s something I know the players wanted.”

The coach said the win by Schneider and McBride was even more impressive, considering it was only their fifth official match together. Schneider transferred in from a private school this year and the pairing is still essentially learning to play together.

The coach said that although the rivalry between the Vineyarders and CCA is intense, it is also respectful. “I talk on the phone with their coach [Ralph Herbst] fairly regularly, so there are never any hard feelings,” Mr. Fennessy said. “He actually congratulated me after the match and said: ‘I’ll see you later this season when we play over there [in Osterville].'” 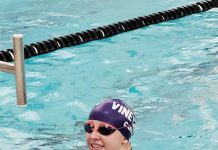