The Vineyard varsity soccer teams came up victorious Monday in non-league matches against the Dennis-Yarmouth Dolphins.

The girls downed D-Y, 2-0, at Dan McCarthy field in Oak Bluffs. Jenny Lindland scored both Vineyard goals in the first half. The first was a header to the far post off of a Mariah Campbell free kick from 35 yards out. The second came on a squibber in close.

The win was a welcome turnaround from a tough loss to Whitinsville Christian in the home opener on Saturday.

“After our disappointing second half against Whitinsville Christian, we came out and played two really good halves of soccer and moved the ball effectively,” coach Richard Bennett said. “I thought it was a good recovery from our match on Saturday.”

The boys traveled to South Yarmouth and claimed their first win of the season, 3-1. Rodrigo Honorato scored following a corner kick to put the Vineyarders up 1-0 in the 32nd minute. Jacob Lawrence and Jack Roberts added second half goals for M.V., who improved to 1-1-2.

Saturday, both teams played on the home pitch for the first time this season.

The girls took on the Whitinsville Christian Crusaders for the second time in a week and again came up short by a 2-1 score.

The Purple played an inspired first half, employing a crisp short passing game to keep possession and earn some solid attempts at goal. The teams went to the halftime break tied, 0-0.

Two minutes into the second half, Jenny Lindland, who had tended goal in the first 40 minutes, burst through the Crusaders defense and scored on a breakaway to give M.V. a 1-0 lead.

The Crusaders stormed back and tied the match five minutes later. From there, the Vineyarders stopped passing and opted mainly for clearing the ball out of trouble. The Crusaders pressed the play and earned nine corner kicks in a 15-minute span.

The pressure finally paid off. With eight minutes to play, Molly Stark stepped up and blasted a 35-yard free kick into the twine for the match winner.

Three hours later, under the lights at Dan McCarthy field, the Vineyard boys took to the pitch against Nauset and tied the Warriors, 1-1.

Nauset came into the match with a three-game winning streak against M.V., which included a 5-1 romp on September 5.

The Vineyarders forced the play early. Jack Roberts scored in the fourth minute to put the Purple up 1-0.

The Vineyarders continued to attack but Nauset equalized against the run of play. Following a Warrior counterattack, the Vineyarders were penalized when Cody Savonen was downed in the box. Adam Huber stepped up and calmly slotted the spot kick past Vineyard keeper Jackson McBride to tie the match.

Nauset had two good chances to score late in the half but failed to capitalize and the teams shared the points. 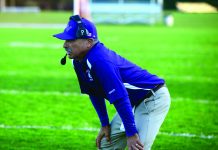 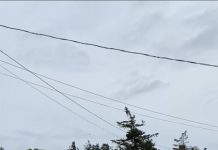 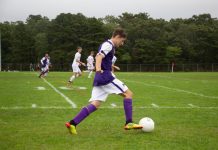