This winter, Gannon & Benjamin Marine Railway on Vineyard Haven harbor is at work recreating a small piece of the nation’s maritime history. The Island boatbuilders, designers and builders of pleasure craft large and small, power and sail, are building one of the whaleboats that will be carried by the Charles W. Morgan, the last remaining wooden whaleship and the oldest American commercial vessel still in existence.

The Morgan is now undergoing a multi-million dollar restoration at the Mystic Seaport Museum in Mystic, Connecticut. Built in 1841 in New Bedford, she made 37 voyages under sail around the globe during an 80-year whaling career. The vessel arrived at Mystic Seaport in 1941 and was designated a National Historic Landmark in 1967.

The museum expects to relaunch Morgan this July, and in 2014 she will begin her 38th voyage, this one to historic ports in New England, including Vineyard Haven.

In all, nine whaleboats are under construction by third parties that include, in addition to Gannon & Benjamin, the Lowell Boat Shop and the Philadelphia Independence Seaport Museum.

In its most recent update in December, Mystic reported that planking on the Morgan continues apace and that the last of the ship’s knees — structural members that, among other uses, connect deck beams and frames — will be placed early this year along with the installation of a new deck beam fashioned from yellow pine salvaged from a Connecticut mill. The ship’s new spars are expected in mid-January.

Meanwhile, work has begun in the austere surroundings of the Gannon & Benjamin shop, which but for the use of electricity, resembles an 19th-century shipwright’s premises.

According to Virginia Jones, Gannon & Benjamin office manager, the Morgan was built by the Hillman family who originally came from Chilmark. Seven of her series of masters were from Martha’s Vineyard, as were many of the crew on her 37 voyages.

“We feel that it is particularly appropriate for a Vineyard boatyard to participate in this noteworthy project,” Ms. Jones said in an email to The Times that highlighted many of the past and present Island connections to the project.

Ms. Jones said Morgan’s last skipper was Captain George Fred Tilton from North Road, Chilmark. He served as port captain for the Morgan. He wrote about his sailing adventures, although not on the Morgan, in a book titled “Cap’n George Fred,” which includes an account of his efforts to save an Arctic whaling fleet caught in the ice. “A must-read classic for every Island school kid,” Ms. Jones said. “His perilous walk is quite an adventure story.”

When she does sail east in 2014, Morgan will be accompanied by the fishing vessel Roann, an eastern rigged boat built originally in 1947 by Newbert and Wallace Shipyard in Thomaston, Maine, for thelate Captain Roy Campbell of Vineyard Haven.

Roann was rebuilt and now serves as an exhibit at the Mystic Museum to help illustrate the transition of the Gloucester fishing schooners from sail to powerful diesel trawlers. A tugboat owned by R. M. Packer’s Tisbury Towing of Vineyard Haven will also accompany the Morgan.

Matthew Stackpole of West Tisbury, former director of the Martha’s Vineyard Museum, has helped raise approximately $11 million for the Seaport’s Morgan project, whose goal, though higher, is within reach.

Last month, Gannon & Benjamin prepared all the patterns and moulds and set the keel on saw horses in the outer shop. Over the next several weeks work will proceed in earnest.

The whaleboat is patterned on the many whaleboats built by the Beetle Company of New Bedford. According to Bob Douglas, master of the topsail schooner Shenandoah, Beetle kept not just patterns but piles of pre-cut spare parts on hand, which allowed it, in the whaling industry’s heyday, to build a whaleboat on request in a day.

“Presumably every piece of gear carried on board and every bit of hardware was built or crafted nearby,” Ms. Jones said.

Ms. Jones said the public is invited to stop by the boatyard and take a look periodically during the project — “Bring the kids,” she said. “We invite you to take photos, talk with us about the Morgan’s history and historic significance. This is a fascinating project, sort of in keeping with our low-tech methods.” 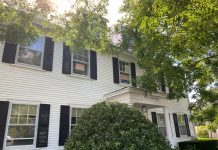