We apologize for the delay in writing this letter to thank so many of you. But, the unexpected death of our father, Joseph B. Gonsalves Jr., has hit us pretty hard.

We were totally overwhelmed with the amount of love and support we received from our family, friends, and the Martha’s Vineyard community.

We, as a family, have gotten together and reflected on how, although it was very sad, it was also very beautifully done. Starting with the wake, having a deputy sheriff at the entrance door standing at attention. The long line of Firefighters, EMTs, deputy sheriffs, and police from all Island towns (men and women), dressed in their Class A or Dress Blue uniforms, conducting a Pass and Review (saluting our father’s casket) and then expressing their condolences to each one of us.

On the morning of the funeral, our friends drove each of our families in their cars. The procession was led by two Oak Bluffs motorcycles, an Aquinnah police cruiser, and Tisbury’s American Legion Pumper Firetruck. As we pulled in front of St. Augustine’s Church, we were greeted by many more officers and firefighters standing at attention, showing their respect for our father. Our friends in the church choir sang songs from the heart.

At our father’s final resting place in the Oak Grove Cemetery, we were received by many more people with the sound of the bagpipes playing. He was read the Fireman’s Prayer, saluted by the veterans and honor guard, gun salute and played taps. The family was presented with the perfectly folded American flag.

What an experience for us, and especially his grandchildren, to see our father, their “Papa” laid to rest with such love, honor, and respect. We are sure he was smiling down on all of you that day.

Thank you also for the food, flowers, cards, hugs, and prayers. And also thank you to the P-A’s benevolent committee.

The Family of Joseph B. Gonsalves Jr. 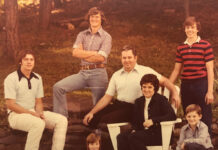