The Martha’s Vineyard Regional High School boys varsity basketball team picked up a solid 71-57 non-league win over Whitinsville Christian School Saturday at the Sancy in Oak Bluffs. They also had to overcome the loss of senior guard, co-captain Kane Araujo, who went down with a knee injury during the third quarter.

“We won, but we lost Kane,” Vineyard coach Mike Joyce said after the win. “I don’t know for sure, but his knee is in a splint. That’s a big loss. He keeps it calm, runs the floor, and plays unbelievable defense.”

The Vineyarders responded well to the setback by outscoring the Crusaders 29-15 in the third quarter to lead, 55-38, entering the final period.

“I was proud of the kids,” coach Joyce said. “They didn’t let it affect them. They seemed to bond together a little bit, play harder, and pulled out a win. I thought Navardo [Anderson] did a great job covering [Richard] Santos after Kane went out.”

Deshawn James chalked up 29 points to lead all scorers as the Vineyarders improved to 3-1.

“The pick and roll with Deshawn, they didn’t have an answer to or an adjustment, so he just kept taking it to the hole,” Mr. Joyce said.

The Vineyarders got off to a fast start, maintaining an eight-point lead well into the second quarter. The intensity and execution from the hosts dropped in the final five minutes of the half as Whitinsville, the 2010-11 MIAA state Division III champs, battled back to close within 26-23 at the half.

“We had a five-minute lull in the second quarter where we didn’t score; didn’t do anything really, but thank God they woke up in the second half and really came out playing hard,” coach Joyce said. “The intensity was much better.”

Tim Roberts had a great game at both ends of the floor, finishing with 16 points. Navardo Anderson added 12.

Tim Roberts scored 17 points, Navardo Anderson had 16, and Deshawn James added 10 as M.V. overcame a 9-0 deficit and defeated Snowden International 63-47 Monday in Boston. The Vineyarders start the Eastern Athletic Conference schedule Saturday with a game in Attleboro against archival Bishop Feehan. The jayvee game starts at 1:30 pm and the varsity game is at 3 pm. 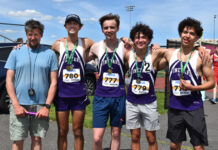 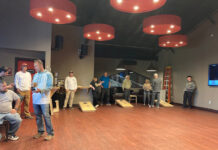