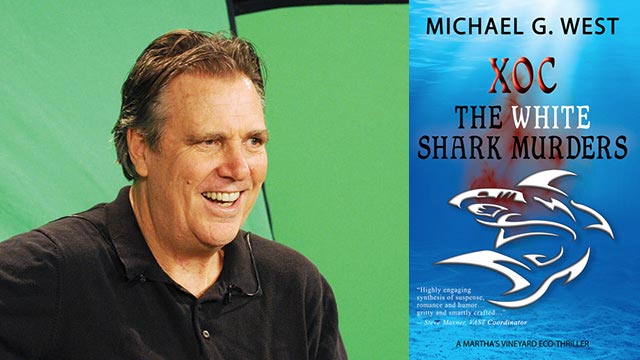 In “Xoc,” local author Michael West spins a multi-textured yarn around a fictionalized version of the ever-contentious Oak Bluffs Monster Shark Tournament. To the familiar waters of the Martha’s Vineyard-based novel of suspense, productively fished by Cynthia Riggs and the late, great Philip Craig, Mr. West brings a stiff dose of environmental activism, billing his anti-tournament novel as an “eco-thriller.”

In a lightly fictionalized “Cottage City,” the town’s dominant businessman is in cahoots with the Mafia, running a high-stakes gambling ring around an annual shark-fishing tournament. A cabal of eco-terrorists seeks to disrupt the tournament, perpetrating a series of “chum bombings” and other attacks that manage to stay just shy of lethal. And into the charged atmosphere washes Sam, a U.S. Marine recently returned from Afghanistan, where he, too, was pushed toward and indeed past the limit of human decency.

Building on this volatile mix, Mr. West works the conventions of the genre with considerable skill. Part of the fun of a Vineyard novel comes from reading about familiar places and the distinctive rhythm and texture of life on the sandbar. The characters in “Xoc,” to be sure, go to much better parties than most of us do. But the light and the landscape are accurately rendered, and Mr. West captures the complex social ties that hold the Island together (and sometimes pull it apart). A few real-life Islanders wander in for cameos. And as a naturalist, I enjoyed the occasional portrayal of our region’s unusual wildlife: any novel that mentions Leach’s storm-petrels gets extra points from me.

Likewise, you’ll find all the furnishings you expect in a thriller: thick-skulled thugs, weapons, and electronic gizmos abound. The women are mostly beautiful and hot to trot; the men, mostly tough and either conflicted but good-hearted, or utterly depraved. The protagonist, though, is a notable exception to the book’s rather conventional characterization: Sam, a likeable war criminal, is complex and believably human, and his first-person narration supplies an engaging voice and perspective.

Monster Shark tournament proponents will dismiss the book’s portrayals of cruelty as exaggerated (though a lecture by one of the eco-terrorists about mercury levels in shark meat reflects real-world Environmental Protection Agency advice). And fence-sitters and even readers opposed to the tournament may find this novel’s polemical elements intrusive. The environmental agenda blends less naturally into an essentially escapist type of book than it does, say, in Carl Hiaasen’s satires on Florida, and the resulting shifts of tones may put readers a bit off balance.

But Mr. West extracts a lot of narrative drive from his fictionalized tournament. Sharks, including a pregnant great white, are caught and butchered. Sam, inevitably, falls in love, falls in with the eco-terrorists, and falls into the way of the Mob and its gambling ring. His loyalties are tested by the realization that a blood brother and fellow Marine from the Afghan war is the son of one of the mobsters who may or may not be running the ring.

Mysteries thicken, violence intensifies, and the tempo of the novel accelerates toward a gripping, gruesome showdown amid the shrubbery and unexploded ordnance of “Onemansland,” meticulously copied from the real-life Nomans. The final chapters of this book kept me up past bedtime, and the twists aren’t quite over when you think they are.

Interestingly, though, it wasn’t the Vineyard lore, the eco-activism, or the thriller elements that stuck with me most as I put the book down. While delivering on expectations for a fun read, Mr. West explores a serious human theme, and explores it quite thoughtfully. What is trust? How can we tell who deserves it, and how can we regain the capacity to trust when life has whacked it out of us?

One element unaccounted for in the book is the death of Steven James, president of the Boston Big Game Fishing Club, sponsor of the Oak Bluffs Monster Shark tournament for the past 27 years, and another man on January 7, 2014, when their skiff overturned on the Westport River during a duck hunting outing, putting the future of the tournament in doubt.

“Xoc” is available for Kindle on Amazon.com, according to the Sepiessa Press website, sepiessa.com. Actual books can be found at Bunch of Grapes in Vineyard Haven. The paperback version of “Xoc” features a nice binding and attractive design (these things matter to dinosaurs like me). In sections of my copy, the type was unattractively pixellated; otherwise, a few grammatical lapses and typographic glitches likely won’t bother you if you don’t suffer from a copy-editing background.

Mr. West set a stiff challenge for himself with “Xoc,” and he acquits himself honorably. If you’re a fan of thrillers, or of novels set on the Vineyard, this book is worth a read. You might even learn a little about sharks — or humans.

Matt Pelikan, of Oak Bluffs, writes the bi-weekly Wild Side column for The Times.