Edgartown selectmen called businessman Bryan Nelson to their Monday meeting to discuss his plans to rent new pedal-assist electric bicycles from his Upper Main Street auto rental location. Chairman Art Smadbeck said the town has never licensed moped or motorized bike rentals, and is not likely to approve a license for the new electric bikes.

Mr. Smadbeck, an avid bicyclist, said he has ridden an electric bicycle, which can travel up to 19 miles per hour. He sees them as a potential danger on bike paths.

“I know exactly how they work, that’s what gives me pause,” Mr. Smadbeck said. “They take off, they’re flying down the road. I have a very difficult time thinking about somebody coming here that is not familiar with this type of motorized vehicle.”

Mr. Nelson and his attorney, Marilyn Vukota, said the federal and state governments recognized the two-wheel vehicles as bicycles, and that the board of selectmen has no authority to ban them.

“I understand the concern,” Ms. Vukota said. “Respectfully, I don’t think the danger is as great as you might think. He is doing everything he can to make sure he’s putting responsible people on these bikes. I don’t think there is much the town can do to prevent him from renting them.”

Mr. Nelson said he requires renters to wear helmets, watch a safety video, and they must be 18 years old or older.

“First and foremost, it’s a 7-speed bike,” Mr. Nelson said. “It has a pedal assist function. You can turn it off completely.”

Selectmen took no action at Monday’s meeting. They directed town administrator Pam Dolby to consult with town counsel, police, and the planning board, which regulates Mr. Bryan’s business location by special permit.

In a phone interview with The Times on Tuesday, Mr. Nelson said he believes he has the right to rent the electric bikes without a license from the town. “But until I have a little more information, I’m not going to rent the bikes in Edgartown,” he said.

“It adds to existing conservation land, it provides public access, and it supports purchases made by the Land Bank over the years, and private donations from the people on Chappy,” said Adam Moore, executive director of the Sheriff’s Meadow Foundation. The foundation will hold the conservation restriction, and intends to provide trails that link to trails on adjacent conservation land.

Also Monday, selectmen opened bids submitted for a new roof on the Katama Farm barn. The six bids ranged from $74,100 to $179,800. Selectmen took the bids under advisement. 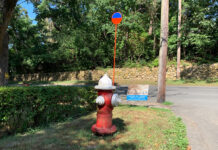 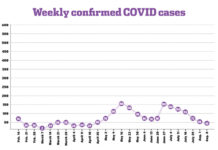