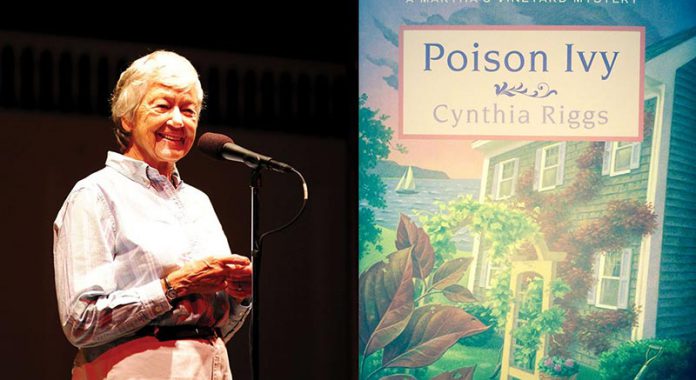 Victoria Trumbull, the heroine of author Cynthia Riggs’ series of mystery novels, a 92-year-old, scrappy, savvy female detective living in a rural area, follows in the footsteps of other famous old lady sleuths like Miss Marple and Jessica Fletcher. But don’t expect Ms. Riggs’ character to sit around drinking tea, crocheting, and sharing pictures of her grandchildren: This amateur detective is not your typical old dear.

In Ms. Riggs’ latest, Poison Ivy, we find Ms. Trumbull — part poet, part deputy sheriff — variously setting off in a sailboat in a violent storm, waiting it out on a stakeout, and even creeping through a field in the pitch dark to aid in the ultimate apprehension of the killer. If these scenarios seem unrealistic to any readers, take note: The 82-year-old Ms. Riggs has as much energy and gumption (as well as poetry chops) as her fictional counterpart.

The author also has a great eye for detail, along with a Vineyard pedigree — she’s a 13th-generation Islander — to know the ins and outs of the Island as well as anyone. So in place of gritty city streets and the hardboiled denizens of the underworld, the very prolific author (this is her 11th mystery in the series) offers up a cast of characters just as interesting. Ms. Riggs’ latest book is populated by a cast of Island eccentrics, cranks, and busybodies, as well as a handful of young people from a variety of backgrounds: a virtual potpourri that defines the Island population.

The difference between the Martha’s Vineyard mystery series and other mysteries set in provincial towns is that, just as in real life, celebrities and other noteworthy visitors tend to pop up on the Island, only to become embroiled in manhunts and other crime-solving capers.

Poison Ivy has as its central plot the serial murders of a number of visiting college professors. (Perhaps there’s something in Ms. Riggs’ past that sparked this interest in turning professors into murder victims? She has both a degree in geology and a master’s in creative writing.)

While the recently founded fictitious Ivy Green College in Vineyard Haven is being carefully scrutinized by a board of off-Island professors, some among their ranks are mysteriously turning up dead and buried on the college campus. Is someone trying to sabotage the Vineyard’s plans for establishing an institution of higher education? Or is a professor who was denied tenure taking out his or her wrath on his more fortunate counterparts? While the local police are at a loss for where to go with the investigation, Victoria takes some proactive measures.

But the murders aren’t the only mystery in Poison Ivy. There’s a kidnapping, a generations-old family feud, a question of paternity and even — the most evil of all — a student-thesis-stealing professor. Ms. Riggs delves deep into the backbiting, competitive nature of academia, and also, maybe longingly, imagines a Vineyard with a bona fide college.

The twists and turns of the various plots hold the reader’s interest straight through to the apprehension of the murderer. But it’s really the details of Island life and the assemblage of interesting characters that make Ms. Riggs’ book a standout among other works of detective fiction. Among her colorful characters, Ms. Riggs introduces us to a heavily tattooed and pierced young mother and poet, a youthful software magnate who’s taking a career break to research his Island roots, a fishing-obsessed TV star, and a recovering alcoholic who has dropped out of the corporate world to work as a handyman. A second group of key players is made up of staff members from a nearby off-Island college.

Readers familiar with the Island will recognize many of the locales which Ms. Riggs describes with an eye for local color — among the landscape as well as the citizenry. From the gossipmongers hanging out on the porch at Alley’s to some salty sailors, there’s a lot of familiar ground. Ms. Riggs also touches on interesting facets of the Island’s history, like the deaf community that once flourished up-Island and the Wampanoag tribe of Gay Head.

It’s not surprising that the author is able to bring so much authenticity to her works of fiction. Not only is she a longtime Vineyard resident with connections to many sectors of the community (Ms. Riggs owns the Cleaveland House, a B & B in West Tisbury, and runs a local poetry group), she is also as familiar with everything maritime as just about anyone on the Island. She has variously operated boat charters, run the Chesapeake Bay Ferry Boat Co., and worked as a rigger for the Martha’s Vineyard Shipyard.

Her unique résumé has allowed Ms. Riggs to add those realistic touches that make each book a great introduction to the Island and Island life. And as an amateur naturalist, Ms. Riggs knows the land as well as the sea of her ancestral home. Each of her mystery books is named for a type of local flora.

It’s a pleasure to tap into a resource that’s expert in so many areas of Vineyard life. While Ms. Trumbull may also have credentials in some surprising areas of knowledge, like any good little old lady sleuth, she also enjoys working in her garden and chatting over a cup of tea — with friends as well as murder suspects. Ms Rigg’s lady detective is about as likable and fascinating an Island character as you’re likely to encounter anywhere.