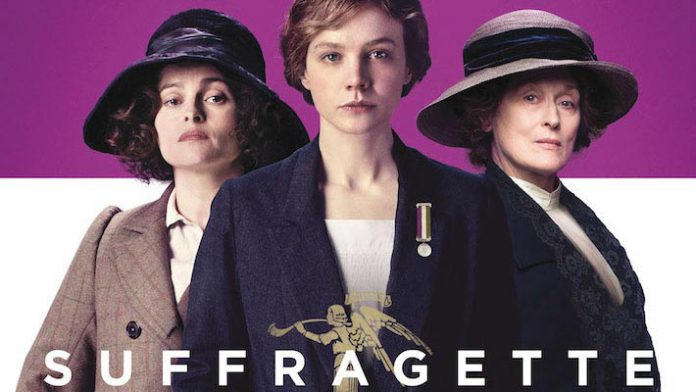 The Martha’s Vineyard Film Center opens “Suffragette” and “Heart of a Dog” this weekend. The two films could provide bookends to the lives of modern women. “Suffragette” delves into the women’s movement in London at the start of the 20th century, while “Heart of a Dog” presents a unique and lyrical self-portrait of the 21st century American performance artist Laurie Anderson.

The Saturday, Nov. 21, the screening of “Suffragette” will start with a talk by Fredie Kay, chair of the MA Women’s Suffrage Celebration Committee. Ms. Kay will discuss the activities planned for the 95th anniversary of women’s suffrage in the U.S., as well as provide background on the movie. The Film Center and the M.V. League of Women Voters are jointly hosting the event.

It is particularly fitting that “Suffragette,” directed by Sarah Gavron, carries a PG-13 rating. That designation may encourage girls and young women to see the film and appreciate the importance of the 19th amendment, which gave American women the right to vote. Carey Mulligan stars in a potentially Oscar-winning performance as Maude Watts, a 24-year-old industrial laundry worker in 1912 London. A composite character drawn by screenwriter Abi Morgan, Maude starts out as an unassuming worker and a loving wife and mother, until a co-worker initiates the process of her radicalization. Her husband Sonny’s (Ben Whishaw) alienation illustrates the painful sacrifices Maude must make.

Many of the film’s other characters are based on actual people. They include Emmeline Pankhurst, played by Meryl Streep, who led the fight for women’s rights in England. Another is Emily Wilding Davison, played by Natalie Press, who was repeatedly imprisoned and endured 49 forced feedings for her hunger strikes. She must make a horrifying choice near the end of the movie. Much of the plot is based on actual events.

“Suffragette” is set visually in a bleak, working-class world where women toil under brutal and dangerous conditions. Maude’s mother was scalded to death, and she carries tattoo-like scars on one arm. Maude’s supervisor Mr. Taylor (Geoff Bell) is a cruel and sexually abusive boss. Chancellor of the Exchequer David Lloyd George (Adrian Schiller) seems sympathetic to the women’s plight when they give testimony to their mistreatment, but the British government ignores their call for the vote. As Prime Minister, George did, however, eventually push through the beginnings of the British women’s right to vote.

In a strong performance by Helena Bonham Carter, pharmacist Edith Ellyn leads the fight by the Women’s Social and Political Union, which turns increasingly violent. When words fail, the women turn to activism, bombing mailboxes, cutting electrical lines, and even blowing up George’s summer home.

In an early use of surveillance techniques, Special Branch detective Arthur Steed, in a subtle performance by Brendon Gleeson, employs new cameras to track the women’s activities. The importance of winning media coverage offers another early example of how the fight for the vote proceeded.

“Suffragette” describes a grim chapter in the fight for women’s rights. The struggle was not an easy one, and it is a chilling reminder of how difficult it can be to bring about needed change.

‘Heart of a Dog’: A meditation on life, love, and death

Laurie Anderson’s dog Lolabelle creates the framework for the well-known musician/artist’s impressionistic meditation. Opening with the artist’s semiabstract drawings, Ms. Anderson pays tribute to a pet that played an important role in her life. This documentary demands the viewer’s patience and understanding as it pieces together fragments of the artist’s life and builds a narrative of sorts that includes not only her rat terrier’s extraordinary life, but that of Ms. Anderson’s late mother and her late husband, the musician Lou Reed.

Ms. Anderson’s voiceover helps unify the film, as she describes the trip she took with Lolabelle to the northern hills of California and uses experimental film techniques like cracked and indistinct images to convey meaning. “Heart of a Dog” will not appeal to all viewers, but it succeeds in conveying complex truths about life, death, mourning, and love.

For screening times and tickets, visit mvfilmsociety.com or go to MVTimes event listings.

Tune in and jam out

Let’s go to the movies

In a good light