My fascination with herring dates to my childhood on Cape Cod, when I discovered the fish swimming up a nearby creek to be a thing of beauty — and that their roe was really good to eat.

Later in life, while reading “Caleb’s Crossing,” a novel by Pulitzer Prizewinning author Geraldine Brooks about 17th century Martha’s Vineyard, I came to see alewives, a kind of river herring, as players in human history, their role in early New England as predictive of conflicts yet to be waged over diminishing natural resources. Today herring are representative of efforts on the Vineyard and elsewhere along the coast to restore streams and rivers for all species of fish dependent on clean, flowing water.

For my family, the cry, “Herring’s running!” uttered toward the end of April or beginning of May — depending on how long and cold the winter had been — meant spring was officially on. Time to fish, to eat well, time to plant the garden. Dusting off dip nets, checking for possible holes inflicted by field mice overwintering in our old barn, we headed down to the Stony Brook in Brewster, site of a large alewife run in the shadow of a historic grist mill.

When not hunting herring for food, my sisters and I raced them. In a game of your herring against mine, we ran beside them the length of the run — a series of shallow pools through which the stream drops in elevation allowed the herring to navigate around the dam. Pointing to our fish in the shallow pools, cheering our fish on as they finned toward each small waterfall, swimming faster and faster to gain momentum, we’d watch them leap each obstruction. Little in nearby nature is more beautiful than a silver herring seen through the prism of moving water, sunlight shimmering off each ripple of water — the Impressionist paintings we would later see in Paris museums would evoke that picture.

Following our fish up past the dam at the old mill, we would lose sight of them as they swam off into a chain of ponds to spawn. We too went off, into the woods in search of turtles, lady’s slippers, and each summer at least one really nasty case of poison ivy.

My pursuit of herring ended in adolescence when my father’s career path veered from novelist to diplomat, and we went to live in cities. Late in life I returned to New England and settled on Martha’s Vineyard, in part because it reminded me of my Cape Cod childhood.

As on the Cape, the Vineyard once supported numerous herring runs. But with the exception of members of the Wampanoag tribe, Islanders are no longer allowed to take herring for food or fishing bait. That was prohibited more than ten years ago when herring populations diminished and once-productive runs turned into a trickle.

Overfishing at sea, where river herring return once they have spawned, and the degradation and blockage of the rivers and streams that are so important to their reproduction, are thought to be the cause of the drop in herring numbers. For fishermen, scientists, environmental activists, and those lucky enough to live near a run, the focus is on restoring formerly productive large and small streams.

In 2010, Pulitzer Prizewinning authors Geraldine Brooks, and Tony Horwitz bought a home on the West Tisbury–Chilmark town line bordered by the Tiasquam River, where they live with sons Nathaniel and Bizu in an ancient house built by a line of 17th-century millers. In 1665, Benjamin Church, later to become a hero of King Philip’s War, dammed the Tiasquam in order to power the Island’s first grist mill. The pond he created was named Look’s Pond for Thomas Look, who acquired the water rights in the early 1600s.

The Tiasquam, more a stream than a river, flows from Look’s Pond to Town Cove and Tisbury Great Pond. Periodically, Islanders breach the barrier beach that separates the pond from the Atlantic Ocean, allowing the herring to enter the pond and return to their natal streams.

By damming the Tiasquam, Church “destroyed a herring run that had fed the Wampanoag each spring, when the fish known as ‘the silver of the ocean’ poured upstream to spawn,” Geraldine Brooks explained to an audience in her native Australia five years ago, while delivering the prestigious Boyer Lecture called “Our Only Home,” referencing the planet Earth.

Not just herring suffered, according to Prudy Burt of West Tisbury. Ms. Burt, a landscaper and member of the West Tisbury conservation commission, has worked tirelessly in recent years to see the dam that blocks the nearby Mill Pond removed as part of a long-term effort to restore the Mill Brook to its natural, free-flowing state. She said Church’s early dam, as well as later mill dams, had a detrimental impact on a number of species that include white perch, brook trout, and American eels.

“In a healthy stream,” Ms. Burt explained, “species are able to move freely, enabling them to escape high water temperatures and predators, and to seek food and suitable breeding/spawning habitat. When you isolate small populations of species between these dams, you reduce the food supply, the habitat, the gene pool, and you reduce their chance of survival.”

It is possible to repair

In a recent presentation to an Australian audience, she used the rabbi’s words to describe her plans to help repair the damage caused by the Look’s Pond dam in her backyard. “The Jewish idea of tikkun olam, of each individual working to gather up and repair the shards of a fractured creation, is a metaphor that I think speaks eloquently to our present circumstance,” she said.

Geraldine consulted with Brad Chase, a biologist, and herring expert in the Massachusetts Division of Marine Fisheries, who works with municipalities and private landowners to restore and maintain herring runs.

Removal of the four-foot-high concrete and stone dam was not a realistic option, given the cost, permitting, and impact on surrounding properties. The height of the dam and other factors would not allow for a traditional fish ladder.

But there was another solution: a shallow brook that circles from the pond, cuts through her backyard and rejoins the Tiasquam after it drops over the dam. Planning continued.

West Tisbury herring warden Johnny Hoy, a stonemason by trade, enthusiastically embraced the effort. He and others had been working to remove the boards from a spillway used to create a longstanding farm pond that blocked the Tiasquam midway between Look’s Pond and Town Cove.

Following a series of meetings, the owner and the lessee of the lowest Tiasquam dam (The Trustees of Reservations and Eric and Molly Glasgow of Grey Barn Farm, respectively) gave permission. On April 17, 2015, Prudy Burt pulled the boards on the old spillway. Hundreds of herring began moving up the stream above the drained pond the next day.

Geraldine was out gardening when the fish showed up: “At first I thought they were an unfamiliar kind of river grass, their sinuous brown backs arabesquing under the water, then I caught the shimmer of their sides,” she told naturalist Matt Pelikan, in a story published Nov. 12, 2015 (“A dam removed, the Tiasquam begins to heal”).

It seemed as if the Wampanoags’ silver from the sea had returned. Birds began feasting on the fish, which could go no further. Geraldine began scooping up fish to get them to the dam. She was soon adorned with silvery scales “like a mermaid.” Most fish remained stranded.

On March 19, Brad Chase and a DMF crew arrived on the Island and traveled to West Tisbury with three things: hope, hardware, and a plan for a fish passage three years in the making that would allow herring and other fish species to gain access to the upper reaches of the Tiasquam, closed off for centuries.

The crew installed a custom-made fish ladder onto the lip of a spillway. More tinkering was needed to get it to sit in the brook. Johnny Hoy moved rocks to create a small pool where fish could pause before navigating the series of wooden steps over which water flowed. And then it was done.

No doubt, as you read this, herring will have started to arrive, and will once again seek to return up the Tiasquam, and find that at least along this small stretch of the river, the shards of a fractured creation have been gathered up. 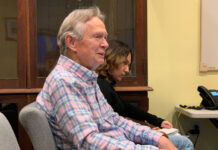 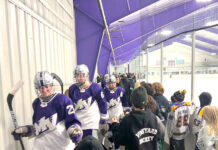