At a warm and sunny Penn Field in Oak Bluffs on Sunday, fans at the well-attended Martha’s Vineyard major and minor league championship games were treated to dominant baseball and a nail biter of a game.

Sunday morning, the Cubs rolled over the Pirates by a 9-0 score to win the majors championship behind the five-hit, shutout pitching of Cam Napior (4⅔ innings) and Keaton Aliberti while mounting a nine-hit attack of their own.

In the afternoon minor league championship game, the Rangers rallied to beat the Twins, 9-8. The game featured a stellar game-ending catch by Ranger centerfielder Henry Wansiewicz to preserve the victory. The Rangers were aided by a three-run inside-the-park home run from Nick Rabeni.

Fans who watched the major and minor games got a good perspective on the growth in skills and game savvy that players develop between minors and majors after one or two additional years of coaching and development.

Martha’s Vineyard Little League serves about 250 Island kids with 40 coaches and a host of volunteers and sponsors, who have worked to produce players with good skills and attitudes and to complete a new facility at Penn Field. After covering the championships for three years, I see the commitment parents have to this program, continuing to volunteer long after their own kids have graduated from Little League.

After PA announcer Rick Mello called “play ball” at 10 am, the 13-3 Pirates and the 10-6 Cubs, the two top-seeded majors teams, squared off.

Baseball, like life, is not always predictable, as Pirates pitcher Nico Arroyo learned as he watched four cleanly fielded infield rollers and topped grounders in succession turn into hits, and eventually into five first-inning runs for the Cubs.

The Cubs would manage four hits the rest of the way, adding a single run in the second and three more in the fifth to seal the victory. Cubs leadoff man Finn Lewis had three hits, and Jacob Sylvia had two hits. Richie Combra and Teagan Myers drove in two runs for the Cubs, who got single RBIs from Finn Lewis, Cam Napior, and Keaton Aliberti, whose third-inning line drive double off the right-field fence missed being a home run by a foot.

Nico Arroyo eased some of his frustration in the Pirates’ first inning at bat with a long two-out double to centerfield. He was stranded thanks to a nice catch by left-fielder Ashley Brasefield on a drive by Pirate centerfielder Ben Mulvey.

The first inning decided the game, and the baseball gods played a role. Everything the Cubs hit fell in for a hit, while the Pirates hit the ball hard but generally at a Cubs fielder.

Pirates’ leadoff man Tobey Roberts had two hits in the game, including a double. Catcher Liam Marek, Kaleb Hatt, and Eleanor Hyland each had singles for the Pirates.

Cubs pitchers Cam Napior and Keaton Aliberti and jaw-dropping defense were the story after the first inning. Cam went a strong 4⅔ innings, striking out four and walking only two batters.

Keaton Aliberti escaped a fifth-inning jam and pitched a shut-down sixth inning for the victory. The Cubs executed two (2) double plays in the contest, one a slick 6-4-3 and the other on a Teagan Fenner line-drive rocket caught by leaping second-sacker Finn Lewis, who then doubled a runner off first base.

The Pirate’s defense also glittered with Kaleb Hatt pickin’ it in left, and catcher Liam Marek saving one run with a diving backhanded stop of an errant pitch and a sweet pickoff of a Cubbie with a snap throw to first-sacker Harper Hearn in the sixth inning.

The Rangers outlasted the Twins 9-8 for the championship, a hard-fought game contested to the final out — a game which neither team was expected to reach.

“Mashers? We don’t have any mashers. We have kids who love to hit the ball and run,” home team Rangers coach and former Island Little League umpire Larry Johnson said with a grin before the game.

The Rangers’ sense of humor was tested early as the Twins fashioned two runs in the first inning, courtesy of a leadoff single from Hayden Higgins, and three walks and an RBI groundout from cleanup hitter Mark Clements. The Rangers answered with a run on hits by Hunter Johnson and the first of three hits from Volkert “Kerty” Kleeman.

The Twins, playing small ball brilliantly, added three more in the second to take a 5-1 lead into the third. The Twins’ strategy included the bunt, and centerfielder Gus Lambert’s perfectly placed RBI bunt in the second ought to be required viewing in Major League Baseball clubhouses. That’s ability plus good coaching, folks.

The Twins struck again in the third inning, scoring twice on hits by Holden Brew and Gus Lambert, which scored Mark Clements and Tyler Shipway, who had singled. The Twins were robbed of a chance for more runs when Ranger’s Nick Rabeni snagged a sizzling line drive off the bat of Hunter Boldoc to end the inning.

The Rangers mashed a lot in the third, scoring four times, three courtesy of a three-run inside-the-park homer by Nick Rabeni. Nick’s four RBIs led the day in both majors and minors batting, and his homer cut the Twin lead to 7-5 after three innings.

The Twins created another run and an 8-5 lead in the fourth inning on a walk to Josh Salop, a single by Bryan Sornas, and an RBI groundout by Mark Clement before the Rangers exploded for three runs in the bottom of the inning to tie the game at eight runs apiece. The Rangers scored on a single by Broden Vincent, and walks to Henry Wansiewicz and Tate Fairchild-Coppoletti, before Wyatt Wiggins singled in a pair and Tate scored on a wild pitch.

The Twins went quietly in the top of the fifth, and the Rangers scored what would be the winning run on Kerty Kleeman’s triple, his third hit of the day. He scored on a Nick Rabeni RBI groundout to give the Rangers a 9-8 lead entering the last inning.

The Twins’ Hunter Boldoc, who hit the ball hard all day, singled; Hayden Higgins worked his second walk of the game. With two on and two out, Bryan Sorvas hit an absolute bullet headed for the right centerfield gap until Henry Wansiewicz, racing to his left, snared the drive to end it.

The lasting image of the day was Henry straightening up after his catch with a huge grin on his face before disappearing under a deluge of celebratory teammates. 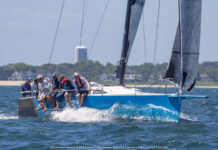