I have long been a New York Jets fan, so when they lost to the Patriots recently, I was inconsolable. Worse still, I was frustrated. The Jets had more rushing yards and more passing yards than the Patriots, so by all measures of fairness, the Jets should have been declared the winner of that game, if it were not for the NFL’s unjust and antiquated “point system” that has never been evaluated or reconsidered since the original rules of the game were formulated.

Then it occurred to me that I did not have to suffer this injustice quietly. No matter what the NFL says — the Patriots are not my division leader. Following the example of recent events on the Island, I realized I must organize a pointless protest with other Jets fans on the Island. We must “stand together” to vent our mounting frustration over a loss in a close game that could have easily ended with a Jets victory even under the NFL’s socially unjust “point system.” Surely past events can be changed if only we can waive confusing and divisive placards while marching in circles!

As anyone who reads the New York papers knows, the Patriots are corrupt cheaters who spy on the opposing team’s bench with hidden cameras, and deflate balls to gain an illegal advantage and then lie to cover their tracks. If the New York Times reports these facts, then we must accept them as the absolute truth that cannot be questioned or debated. So how can we tolerate speech in our community which supports a team whose values are so antithetical to everything that America stands for? Clearly we cannot allow this pro-Patriot rhetoric to spread in our community. That is why I urge every Islander to march with me to declare Martha’s Vineyard to be a fully inclusive and diverse “safe space” where all Patriots and their supporters are not allowed to speak, and only pro–New York and pro-Jets opinions are discussed or tolerated. 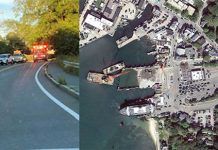