My curiosity has been piqued ever since I started seeing Barnes moving trucks pull into the property on North Road across from North Tabor Farm. I never actually saw a “for sale” sign, but it was clear new owners had arrived, and soon an office sign for Russell Maloney Real Estate appeared. This fall I got my chance to stop by and officially meet Russell Maloney and his partner of 27 years, Jay Schmidt. They invited me to tour the property — once part of the Cagney estate — and see what they were up to.

In the late ’90s, Russell and Jay vacationed at the Inn at Blueberry Hill in Chilmark. Russell had worked on Wall Street for 25 years, had a bout with cancer, and was looking at an iffy prognosis. He told Jay he was not going back. “I decided to cash in my chips,” Russell said, “buy a place here and have a good life.”

In 2002 Russell made good on his promise. He and Jay moved to the Vineyard, rented for a couple of years, and then in 2004 they bought their first Island home in Chilmark. As they described it, “It was a wreck, and rat-infested, and the cheapest house in town in 2004.” They redid it top to bottom, and sold it last winter after only 60 days on the market.

When the Cagney house came on the market last winter, Jay and Russell ran over to see it, and knew the minute they walked through the privet that it was the property for them. The home, dating back to about 1800, had been owned since 1957 by the von Mehren family, who purchased it from the legendary film actor. It had heat, but no insulation. All the windows needed replacing, because none were thermal. The only original details were the ceiling rafters and an original foundation.

Russell and Jay’s home, on almost seven acres, was originally Cagney’s cattle rancher’s home; the barn was used for cattle slaughtering, and still has the tie-down ring attached to the concrete floor. The main home of the original Cagney estate can be seen beyond the couple’s back stone wall.

The home came with elegant perennial gardens, which Russell has been learning to maintain. Jay and Russell were glad to hear that locals were happy they were buying the place, and restoring and renovating it.

Russell and Jay plan to convert the barn into a guest house with an enclosed, glass-backed living room with a view out to the pool, a fireplace, a bedroom upstairs, a bedroom downstairs, and a kitchen area that opens to the pool. Joseph Dick from Yarmouth Port is the architect.

Make no mistake, there’s still plenty of work to be done. They need to make renovations and upgrades to the pool, which had originally been installed by the von Mehrens. They will replace the surrounding decking with grass to reduce maintenance.

There’s a lovely farm pond that they share with some other inhabitants: frogs, turtles, blue heron, and an otter who enjoys both their pond and sunning on the lawn. They installed an aerator in the middle of the pond to keep it healthy. The old pig shed on the property will be left as is.

During my house tour (one area was cordoned off so work could continue), we entered the living room, where a couple of paintings by Elizabeth Sparhawk-Jones were hung. They were from her later period, after 1933, when she worked in a modern style. The paintings were done on the Vineyard, and are part of a collection hung in a barn on Middle Road that Russell was representing for sale. Russell was able to buy his favorite pieces, and as a result he and Jay now have an extensive collection of Sparhawk-Jones’ artwork.

Off the kitchen, there is a master bedroom with a screened-in porch that commands a pastoral view out the back. On the other side of the house, there’s an exercise room which leads to a flower-cutting and -arrangement room, with a heated floor and a door to the outside.There’s a second master bedroom and bath beyond that.

Upstairs are two more bedrooms and a bathroom, with ancient floorboards and numbered timber beams overhead. Jay and Russell say they wish there were more original details and closets, but they are thrilled to be living in their new home.

“This was never a fancy house,” Jay said, “but piece by piece we’ll restore what we can.” The building where the caretaker for the von Mehren family formerly lived is now Russell’s real estate office. They removed a wood stove, painted the walls white, and redid the floors. Behind Russell’s desk are a couple of guitars, which he hopes to learn to play better. In the meantime, work on the house is nearly completed, and the barn should be renovated by June.

I wondered if they’d want to stay in this house forever. I was surprised to learn that for them, it’s all about falling in love with a house, meaning they don’t feel tied down to a property. And they both love the project of renovating an old house, which leaves the door wide open. 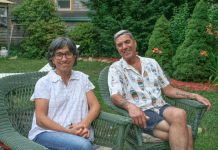 At Home with the Oslyns 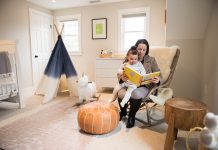 At home with Sophia Brush Warren of Vineyard Decorators 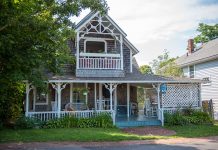 At home with Lisa Katsounakis at the Tivoli Inn