Terry Hass (Marie Thérèse Loveday) of Cambridge and Martha’s Vineyard died on July 7, 2017. Born Feb. 14, 1936, Terry grew up in wartime London. Terry was raised by her mother Mary Greenwood and her grandmothers, after her father Sidney Loveday, an RAF pilot, was killed in action. Terry’s mother remarried in 1948, and Terry’s sister Christine was born. 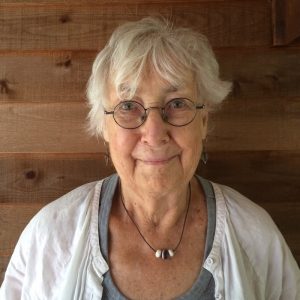 As a teenager, Terry was accepted at the Royal Academy of Dramatic Arts, but decided instead to attend art school in Hornsey, where she studied painting, weaving, bookbinding, fabric design, and pottery. She later qualified as an occupational therapist and worked in London teaching hospitals.

In 1957, Terry met Gerald (Gerry) Hass, a medical student, and in 1960 they were married. The couple traveled to the U.S. in 1961 when Gerry had a fellowship at Boston University Medical Center, and Terry worked as an occupational therapist. Returning to London where their daughters — Caroline in 1963 and Rachel in 1965 — were born, they moved permanently to Cambridge in July 1966, when Gerry was offered a faculty position in pediatrics. In 1970 their daughter Emily was born.

In the early ‘70s, Terry was one of the original members of the Radcliffe Pottery Studio (which later became the Ceramics Program, Office for the Arts at Harvard), where she found her creative community. She continued to work at the studio for the next 35 years, and was a valuable staff member and mentor. A potter’s potter, Terry’s work was admired for its pleasing elegance and functionality.

Terry and her family enjoyed vacations on Martha’s Vineyard, both camping and in a summer rental. In the late 1980s they built a year-round house, and eventually a pottery studio. The fulfillment of a longtime dream, the Vineyard house filled with her pottery, was an expression of Terry’s life. The screened porch with a view of the garden was her favorite place to be.

In lieu of flowers, donations to support scholarships in the name of Terry Hass may be made to the Ceramics Program, Office for the Arts at Harvard, 74 Mount Auburn Street, Cambridge, MA 02138.

The funeral will be private, with a memorial service to follow in spring 2018.