An earthy herbal scent came from the golden-green paste that Bridgette Bartlett glided onto a client’s skin outside Citrine on Main Street in Vineyard Haven. Bridgette held a small cone with a fine tip in her left hand, while she steadied her wrist with the right one. She gripped the henna-filled pen like a delicate tool, moving it with focus and flexibility.

You know how it’s inexplicably satisfying to watch someone frost a cake or use a gel pen? That’s how I’d describe watching Bridgette work with her henna. She creates smooth lines of symmetry and effortless swirls and dots, until a complete work of art comes to life on your skin in a matter of minutes.

“That’s what drew me to it, the way it moved,” Bridgette told me. “Henna gave me my artistic voice.”

Bridgette bought a henna kit four years ago while living in Lincoln, Vt., where she grew up. She was always into photography, and always doodling, but these mediums never struck the artistic chord the way henna did. “I immediately ordered more, and I had to find out everything I could about it,” she said. “Any surface I could henna on, I would.”

It blossomed into a business, Maple Mehndi, which is now based on Martha’s Vineyard, where Bridgette lives through the Fall. She’s gained quite a few followers over the years — more than 163,000 of them, to be exact. “I realized Instagram would be an interesting platform to share my work,” Bridgette said. “There’s a really big audience looking for henna.”

Bridgette’s background in photography helps Maple Mehndi stand out from the rest: “If you’re searching for henna, a ton of pages will come up, but only a handful of them look professional. When you can capture henna in a really beautiful way, it’s going to drive more people to your page.”

A huge part of her impressive following has to do with the fact that she started her Instagram account before March 2016, when the popular photography app stopped organizing user feeds chronologically.

“I started gaining followers a lot more slowly after Instagram implemented the new algorithm. Now my posts only show up on feeds that regularly interact with my page,” Bridgette said. “My posts used to easily get 3,000 likes, and now with 40,000 more followers than I used to have, I’m lucky to get 1,000.”

She also uses her Instagram page as a portfolio for customers to pick out designs during the pop-ups she hosts three times a week. During the summer, she was at Cirtine on Fridays, Salte on Saturdays and at the Chilmark Flea Market on Sundays. Now that the season is over, she plans to just have pop-ups at Citrine on Saturdays. She can flawlessly henna a hand in five to 10 minutes, and the designs cost anywhere from $20 to $40, depending on the style and size. People often book her for private appointments, parties, and weddings.

“It’s done for celebratory occasions,” Bridgette said. “Any reason you’d get your hair or makeup done, or wear a fancy dress, is a reason to get henna. It’s one of the oldest forms of cosmetics.”

Bridgette often travels to India to do henna for brides and their families at large weddings, as well as around the U.S. Just recently, she was commissioned to design henna for a bride in Atlanta, Ga. These jobs require more focus and stillness, and designs can take her up to an hour.

Henna originated in parts of North Africa, South Asia, and the Middle East where the climate is dry and arid and the henna plant can grow. Once it’s harvested, the leaves are crushed into a powder, which are mixed with sugar, lemon juice, and other oils that turn the sifted plant into a paste. It is then applied to the skin, and leaves a copper-color stain that lasts for about 10 days.

Bridgette is a huge advocate for natural henna, and mixes her own paste. Her powder is exported from Rajasthan, India, and she mixes up a fresh batch before every session. She’s also mastered the applicator, and rolls her own henna cones in a shape that perfectly fits her hand so it doesn’t fatigue. “Most professional artists make their own henna, and know specifically how they want their paste to be,” she said.

Her designs are intricate and breathtaking, but like any artist, she’s her biggest critic. “It wouldn’t be as fun if I was totally satisfied,” she said. “I’m always trying new and different styles or motifs that I’ll keep playing with. Every design is different, and they’ll just keep evolving.”

“Mehndi” is the word for henna in Hindi, a language Bridgette briefly studied and finds particularly beautiful. “Maple” comes from the maple syrup she swaps in for sugar in any recipe: “I liked the alliteration. It’s cute and accurate, and seemed like the right name for me.”

Maple Mehndi collaborates with other Island designers, such as Hawkhouse and Roy Swim, to promote one another in a mutually supportive way. “That’s one of the greatest things about working here,” she said. “We have a great community of artists to connect with, and henna complements a lot of their work.”

Calling it a henna tattoo isn’t accurate, and is a common misconception Bridgette tries to clarify: “People like to think of henna as a fake tattoo, but it’s not a tattoo at all. It’s an easy thing to jump to, but it’s really just a plant. Henna is real. You’re not imagining it.” 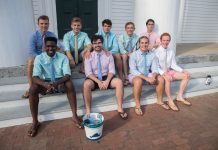 What Islanders Wear to Work