Janice Patricia Van Riper of Vineyard Haven died in the early hours of Friday, April 27, 2018, after a brief illness. She was 92. Her final days were spent surrounded by friends old and new, at the Martha’s Vineyard Hospital, where she had volunteered for nearly 30 years. 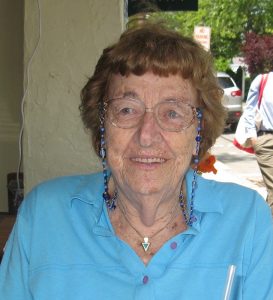 Born in Haverhill on Jan. 30, 1926, Jan grew up during the Great Depression, and came of age in the midst of World War II. She was the oldest of the three children of Orrin Francis Riley, a public works engineer, and Dorothy Nichols (Donahue) Riley, a secretary. The first in her family to attend college, she earned a bachelor’s degree in psychology from the University of Massachusetts and a master’s in social work from Boston University. As a clinical social worker, she helped patients and their families navigate the healthcare system, first at Northampton State Hospital and later at Children’s Hospital in Boston.

In 1957, Jan accepted a blind date with Emerson College publicist Anthony K. (“Tony”) Van Riper. During the three-year courtship that followed, he introduced her to the Vineyard, where his parents had summered since 1933 and lived since 1940. Returning from an Island visit in 1959, he proposed on the deck of the Islander as it passed through the red sector of the West Chop Light, and she accepted. They married in 1960, and Jan gave birth to a son, Anthony Bowdoin (“Bow”) Van Riper, three years later.

Jan remained on the job until shortly before Bow was born, then retired to focus on raising him. First in Brookline and then in Wellesley, she threw herself into play dates, field trips, and volunteering with the PTA and the Cub Scouts. On the day that school dismissed for the summer, however, she would be waiting in the parking lot with the family station wagon packed, ready to head to the Vineyard until the day after Labor Day. When Bow left for college in 1981, she and Tony sold their mainland house, and after 21 summers on the Vineyard, embraced life as year-round residents.

On-Island and off, Jan enjoyed tennis, bridge, Scrabble, and time on the beach. She followed the news avidly, and traveled extensively until Tony’s death in 2001. Above all, however, she loved people. An expert and enthusiastic listener, she could (and often did) effortlessly strike up conversations with complete strangers, eager to hear their stories.

She delighted in long meals with friends, catching up on events in their lives and those of their families. “Start at the beginning,” she would say, leaning forward in anticipation, “and tell me everything.”

Volunteering at the hospital fed that love, and became her second career. She was, from 1981 to 2010, the public face of the Emergency Department and of biweekly and monthly clinics run by visiting off-Island specialists. Clad in a pink cotton jacket, clipboard in hand, she circulated between waiting room and examining room, conveying information, guiding patients, and offering warmth and a friendly ear.

By the time hearing loss forced her to hang up her pink jacket, she had spent more than 9,000 hours over 29 years bringing what one staff member called “a human touch” to an often stressful experience.

Jan is survived by Orrin and Fran Riley of New York, her brother and sister-in-law, and by Judy Riley of Corrales, N.M., widow of her beloved brother Alan. Her memory lives on in the hearts of her son Bow Van Riper, her grandchildren Joe Mundt and Katie Van Riper, her great-granddaughter Matilda Mundt, seven nieces and nephews, and friends beyond count.

Jan’s ashes will be scattered, as Tony’s were, over Vineyard Sound. A celebration of her life will take place in July.