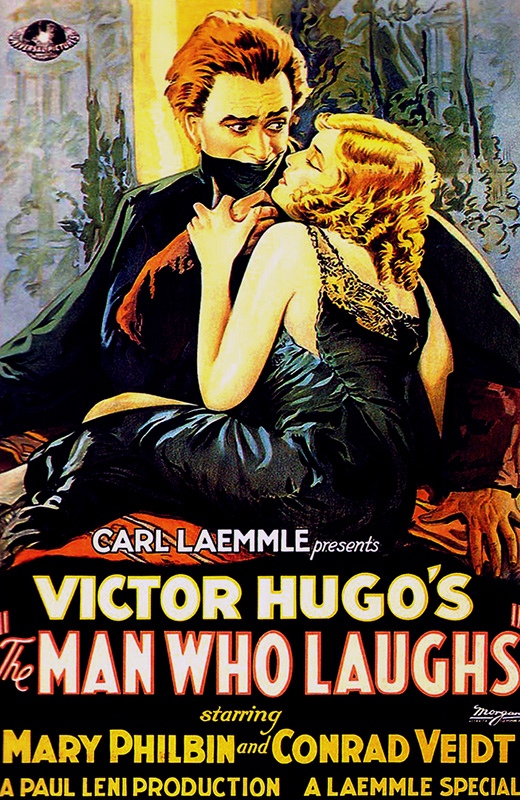 A weekend of films celebrating music arrives at the Film Center on Thursday, June 21, with the Filmusic Festival. Now in its sixth year, the festival opens Thursday with the Berklee College of Music’s Silent Film Orchestra and its newly composed score to accompany director Paul Leni’s silent film, “The Man Who Laughs.” A 6:30 pm reception with jazz piano by David Hannon precedes the film, which starts at 7:30 pm.

Based on a Victor Hugo novel, the 1928 film tells the story of Gwynplaine, a man who has been disfigured with a permanent grin. Traveling in a carnival, he falls in love with Dea, who is blind. After many ups and downs, the couple is united and leaves England.

Friday, June 22, features two documentaries. “Concert for George” screens at 4 pm. It memorializes Beatles guitarist George Harrison in a 2002 event, held one year after his death. A host of musicians, including Harrison’s son Dhani, perform in honor of him. Led by music director Eric Clapton and Harrison’s wife Olivia, they play a variety of Harrison’s best-known songs. Beatles Paul McCartney and Ringo Starr both play, as well as Harrison’s mentor Ravi Shankar. Tom Hanks shows up as part of a Monty Python selection. Although the screening comes 16 years after the event, the pleasure of this Royal Albert Hall concert in London lies in the music played by so many well-known performers.

Also playing on Friday is “Clive Davis: The Soundtrack of Our Lives” at 7:30 pm. Trained as a lawyer, this soon-to-become music impresario was hired by Columbia Records in the 1960s. Davis quickly became a master at selecting musicians and songs that would become hits. The list of musical stars he has fostered includes greats like Bruce Springsteen, Bob Dylan, Aretha Franklin, Billy Joel, Carly Simon, and Puff Daddy. Part of Davis’ genius has been the ability to reach into a variety of musical genres. His particular protégée was Whitney Houston, whom he mentored from her teen years. Viewers will enjoy this trip down a musical memory lane with a medley of pop classics and the remarkable Davis, now 86 years old.

Saturday, June 23, brings three more music movies. “Bang! The Bert Berns Story” screens at 1 pm, and celebrates the ’60s rock ’n’ roll song master who wrote and produced “Twist and Shout,” “Piece of My Heart,” and “Under the Boardwalk,” along with other classics of the period.

In a 4 pm screening of “A Man and his Trumpet: The Leroy Jones Story,” New Orleans music great Leroy Jones is celebrated for having a sound like no other. The jazz trumpeter began playing at age 12 with the Fairview Baptist Church Marching Band. In 1991, he joined the Harry Connick Jr. big band, which led to recording contracts and formation of the Leroy Jones Quintet. In addition to playing with the Preservation Hall Jazz Band, Jones travels worldwide with his quintet. The film features many of the trumpeter’s performances. Director Cameron Washington will the attend screening and answer questions after the film.

Continuing on Saturday, the festival will include a musical drama at 7:30 pm. “Hearts Beat Loud” is about Brooklyn widower Frank (Nick Offerman) who hopes to inspire his daughter Sam (Kiersey Clemons), to perform with him, although she’s leaving home to attend college. When their song, “Hearts Beat Loud,” makes it online to Spotify, Sam has a bigger challenge leaving her father and girlfriend. The all-star cast also includes Blythe Danner, Ted Danson, and Toni Collette. Vineyard guitarist Eric Johnson will perform with his daughter Sydney in the Film Center lobby at 6:30 pm.

The film “Itzhak” screens at 1 pm on Sunday, June 24. The documentary tracks the daily life and music of the celebrated violinist Itzhak Perlman. “Fiddlin’” screens at 4 pm. The music documentary is set at the world’s oldest Fiddler’s Convention in the Appalachian Mountains. The film depicts old-time and bluegrass violin scenes. “Fiddlin’” focuses particularly on talented young musicians, like 11-year-old Presley Barker, who have been playing from a very young age. Director Julie Simone and producer Vicki Vlasic will attend and answer questions. Nancy Jephcote and the Flying Elbows will perform right before the “Fiddlin’” screening at 3:15 pm.

Information and tickets for the Filmusic Festival and other screenings at the Film Center, the Capawock, and the Strand Theater are available at mvfilmsociety.com.