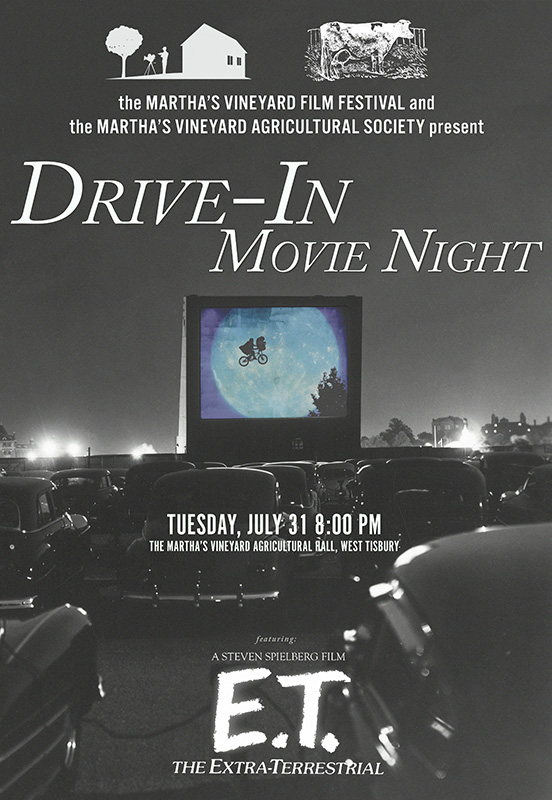 The Martha’s Vineyard Film Festival and the Martha’s Vineyard Agricultural Society have teamed up to create a one-of-a-kind event. On Tuesday, July 31, the fairgrounds at the Agricultural Hall will be transformed into a drive-in movie theater. Steven Spielberg’s “E.T. the Extra-Terrestrial” will be projected on a 40-foot screen, and an FM transmitter will send the audio to car stereos. The movie starts at 8 pm, but come as early as 6:30 pm to get your parking spot, listen to live music, and enjoy food from Island vendors. Walk-ups are welcome too. There will be room for picnic blankets and beach chairs. “It’s a drive-in, Vineyard style,” Brian Ditchfield, artistic director of the MVFF, said in a press release. “It’s got all aspects of a traditional drive-in, plus a few bonus features; it is in a beautiful field with local food and local music.”

MVFF managing director Hilary Dreyer added in the release, “We’ve tried to make a fun event for the whole community. We would love to make this an annual fundraiser benefiting both Island nonprofits.” The evening benefits both the Martha’s Vineyard Film Festival and the Martha’s Vineyard Agricultural Society.

“E.T.” is one of the most beloved, heartwarming films in Spielberg’s long, storied career (50 films and counting), and like other classics he’s made, the press release states, it bears repeated viewing, especially in summer, and outdoors.

Tickets and more information can be found at tmvff.org.