David “Davio” Danielson, a pioneering advocate for progressive politics and personal development who resided in Haydenville, died in Northampton on August 27, 2018, at the age of 79. The cause of death was tularemia. 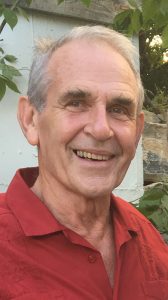 Danielson was known for the passion that marked all of his endeavors, and they were many: healthcare reform, Martha’s Vineyard real estate, personal growth workshops, political campaigns, spearfishing, playing the saxophone and Scrabble, crafting silly rhymes, and love of his wife, among others. He loved jazz and world music, and would often sing along to overheard songs. A true free spirit, he taught kids this lesson: “Talk to strangers!” Danielson spent over two decades working in what he called an “alphabet soup of state and federal agencies” advocating for healthcare reform in the U.S. and abroad, but later shifted his career emphasis to facilitating interpersonal growth and environmentally conscious real estate development.

Of his long career working for social justice, Danielson wrote, “I was always more the idealist and activist than the pragmatist,” willing to be arrested and jailed for causes he believed in. David Arthur Danielson was born in Ipswich on Dec. 3, 1938, to Arthur William Danielson and Hope Frances Flanders Danielson, schoolteachers and educational administrators from the islands of Åland in Sweden and Martha’s Vineyard in Massachusetts, respectively. He spent his early childhood in small-town New England — Pittsburg, Bethlehem, Ebbing, and Somersworth, N.H.; and Ipswich, Chilmark, Oak Bluffs, and Manchester-by-the-Sea. In these landscapes, he developed a love for nature and the sea, and for fishing, snorkeling, boating, and skiing. His roots on Martha’s Vineyard went back to its first governor in the 1600s, Thomas Mayhew, and the Island remained a beloved “home base” throughout his life.

A chance meeting with Estes Kefauver on the campaign trail for president in New Hampshire, a state he would carry in the 1952 primary, led to Danielson’s lifelong interest in politics. Kefauver’s car broke down in front of the Danielson family home, whereupon he was invited in for coffee while waiting for a tow. This event, along with President Truman’s radio addresses early in the Korean War, helped feed Danielson’s enduring “patriotism and idealism about America’s role in the world.” He started reading the papers and following political news when very young, and won his class presidency as a high school freshman.

Soon thereafter, his father was offered a job in Shah-era Iran with a U.S. program intended to help assure that Iran’s sympathies didn’t shift toward communism. Fourteen-year-old David was given the choice to stay in New England with family friends and attend Phillips Exeter Academy, or travel with his parents to reside in unknown and unfamiliar Iran. He chose the latter, and always felt his decision to board a Pan American double-decker plane that year set him up “to be a world citizen who often felt like a stranger everywhere.”

Enrolled in a Presbyterian Mission school in Old Teheran at the foot of the Elburz Mountains, Danielson loved the worldly diversity and bubbling culture of 1950s Teheran. But he was soon shocked to see his own family’s photos on the front page of a local newspaper with a headline suggesting that they were “American spies.” For weeks, he slept with a pillowcase full of personal items, ready for an emergency military evacuation. The family left shortly before a fundamentalist revolution upended the nation.

A year later, at 16, on the strength of a debating scholarship, Danielson arrived at Bates College in Lewiston, Maine, which he would attend from 1955 to ’58. In his junior year he was “allowed to resign” after he and his girlfriend, Judith Elizabeth Frese, violated the 11 pm curfew. They were married in 1958. Danielson finished his B.A. in biology at Boston University in 1959, followed by two years of graduate study at (then) Montana State University in Missoula, from 1959 to ’61. While in Montana, he helped fight the 1961 Sleeping Child Fire, which razed more than 25,000 acres of the Bitterroot Forest.

From Missoula, he and his wife joined the Peace Corps, training at UCLA. Danielson served for two years as interim regional director for the Peace Corps, and secondary school biology teacher at Edo College in Benin City, Nigeria.

In Nigeria, a first child, Robin Sarah Adesode, was born, making headlines as the first Peace Corps baby born overseas. A Ford Fellowship in international development brought the family back to New England, where Danielson earned a master’s degree at the Harvard School of Public Health while working part-time as a Peace Corps trainer and recruiter in Michigan and Washington State. A son, Benjamin Darius Stiles, was born on Martha’s Vineyard in 1964. Danielson served as assistant director of public health programs for Peace Corps/Bolivia in La Paz from 1966 to ’68, where daughter Maria Amy Ellsworth was born in 1966, and worked as assistant administrator of worldwide public health programs for the Peace Corps back in Washington, D.C., from 1968 to 1970.

While serving as the assistant director of the HEW-funded Red Hook Neighborhood Health Center in New York, Danielson was asked to join the Massachusetts Medicaid Program. He targeted a drug called Pavabid that was being aggressively promoted to nursing homes, eliciting expert panel consensus that the drug was ineffectual, saving the state Medicaid program millions. Nonetheless, Danielson soon returned to Washington, D.C., as the national co-director of the Adolescent Health Consortium.

Danielson’s first marriage ended in divorce in 1973. He married Janice Balsam, an early education teacher, on Martha’s Vineyard in 1975, and they set up residence in Newton Upper Falls. Their son, Jason Dov, was born the following year, and a daughter, Lucia Elana, in 1978. Danielson became director of the Generic Drug Program of the Massachusetts Department of Public Health, which led to leadership roles creating generic drug programs around the country, and getting involved in Massachusetts politics.

Over the years, Danielson drafted model health legislation, helped form state and national health advocacy organizations and coalitions, organized U.S. appearances by leaders of the Canadian Medicare program, consulted with the W.H.O., traveled and studied health policies in dozens of countries, testified before Congress, fought for strong health planks in Democratic Party platforms, and worked tirelessly in electoral politics, all in the interest of advancing health reform. He published in the Journal of Public Health Policy, the New England Journal of Medicine, and Generics magazine, among others, and one of his pieces, on the association between taking drugs for medical conditions and psychological and emotional side effects, was chosen for the first Japanese-language printing of the Journal of the American Medical Association. He served on the national board of directors for the Gray Panthers, the elder activist organization; founded Citizens for a National Health Program; helped organize Physicians for a National Health Program; and was a leader of the National Association for Public Health Policy.

In 1987, Danielson persuaded the healthcare committee of the Massachusetts legislature to approve a state ballot question on a national healthcare program. The “Yes on Six” initiative won with 67 percent of the vote in almost every town in the state. Meanwhile, Danielson had gotten the same question on the ballot in Richmond, Calif., where it garnered 82 percent of the vote. It later did almost as well in New Jersey, in an effort mounted by the Gray Panthers. These showings of strong support for improved national healthcare were a breakthrough in the health policy conversation of the time.

Danielson explained his passion for better and cheaper American healthcare by telling the story of a time when, seriously ill, he went to a local Nigerian hospital for a shot of penicillin. Afterward, he asked what he owed. The U.K.-trained physician started his answer with, “You foolish Americans …” Danielson would later recall, “Foolish, indeed. That conversation scripted my lifetime career.”

Danielson also stayed active in politics. He worked on Barney Frank’s early campaigns for Congress, and was a key operative in Vermont on Michael Dukakis’s 1988 campaign for president.

Self-punishing exercise would play a big part in his life, helping him to manage what many saw as his overabundant energy. At 40, after training for just over three months, Danielson ran and finished the Boston Marathon on his first try. He would go on to run over a dozen more. Limping noticeably from his 50s onward, he underwent a double knee replacement at 65, when Medicaid finally covered the much-needed surgery.

Danielson spent time every year on Martha’s Vineyard, often at the shack he inherited from his mother, lovingly dubbed Mudhole. As president of the Tower Ridge Real Estate Corp., he helped develop Tower Ridge, which featured a focus on shared green spaces.

After his second marriage ended in divorce in 1993, Danielson met Deborah Watrous, a registered nurse. They were married in 2000. Together they bought and ran Nine Mountain Retreats in Plainfield, hosting weddings, family reunions, religious gatherings, the Human Awareness Institute, yoga and breathwork practitioners, and other groups. The dance community that centered near Nine Mountain had so many “dancing Davids” that Danielson recounted being in a group in which, when someone called out for “David,” almost a dozen men stood up. He thereafter asked to be known by the nickname he’d been given when knocking on doors canvassing for healthcare causes in the Italian sections of Boston, “Davio.”

In the Berkshires, Danielson remained active in local politics, joining and chairing the Plainfield, board of health, and becoming chair of human services for the Hampshire Council of Governments. He was also a member of the Dance New England Camp Coordinating Group.

One of Danielson’s proudest accomplishments was taking personal care of his beloved mother during and after she drifted into dementia in her 90s. He and Deborah sold Nine Mountain and took an apartment with Hope in Northampton, where they and a team of trusted friends cared for her until the end of her life.

Recently, Danielson led the planning for Lagoon Ridge, an innovative housing development in Oak Bluffs. Approval for the project was a drawn-out effort that he often said he hoped to accomplish “before he died.” The project was approved on August 9 by the Oak Bluffs planning board. In this effort, as well as in the building of the solar-powered house he and Deborah shared in Haydenville, Danielson expressed his passion for environmental consciousness.

Danielson’s sudden death came as a shock to friends and family. “He was such a force!” said a number of people of this man who had cut a figure of near boundless vitality, and who was dancing, bike riding, and pushing himself to work and play long hours until the last week of his life.

He is survived by his wife, Deborah Watrous, five children, a stepdaughter, Azana Watrous, and six grandchildren. His family has requested that those interested in honoring his life make a donation to the ACLU or the Climate Action Network.