The Chilmark library hosts Civics 101 with Jonah A. Maidoff on Wednesday, April 24, at 5 pm. Ever get the feeling that you could be more involved in shaping the world around you instead of letting it happen to you? Do you ever want to change the rules or make something work better in the community or country? Maidoff says with some effort and networking, you can make a positive difference in the lives of your fellow human beings and the lives of all creatures.

According to the library’s press release, visitors to Civics 101 can engage in a discussion of the process and guidance of the ship of state. The variety of methods and levels of engagement with government can be daunting at times, the release says, but in other ways it is as simple as engaging in conversations and building agreement. The presentation will look at local, state, and federal power, and explore how democracy works at different levels. This program will look at various methods of making change, and discuss how much power citizens have to shape what happens in their community, state, and nation, and how citizens can access and participate in the democratic process.

Maidoff has taught at the Charter School for 25 years, and is a recipient of a Martha’s Vineyard Vision Fellowship. He is a playwright, volunteer firefighter, and a concerned citizen, the release says. Maidoff is a member of We Stand Together/Estamos Todos Juntos and the Chilmark energy committee. 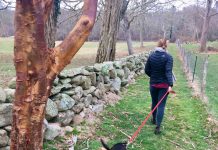