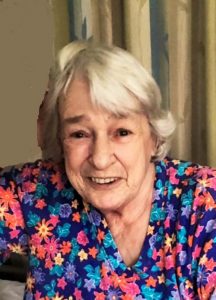 Lucy was born on March 12, 1940, to John Costa and Mary Rezendes, and grew up in Edgartown. She graduated from Edgartown High School in 1958. She married Joseph Roy in 1964, and shared 32 years of marriage.

Growing up, Lucy was a very good athlete, and played softball, basketball, and dodgeball. According to her classmates, she could hit the ball out of the park, and you didn’t want to be on the other end of her throws playing dodgeball. We were also told that she was a fantastic cheerleader, and was very artistic. She loved to draw and color pictures.

Lucy was a loving and devoted mother who was a very hard worker; she received her babysitting certificate in high school. She worked for years at the Harborside Inn as a chambermaid, and later at the Martha’s Vineyard Hospital as a housekeeper for many more years, until she became a homemaker for her children.

Lucy loved to socialize, listen to live bands, and dance in her younger years. A favorite activity of Lucy’s was playing cards, especially rummy with her friends and family. She also enjoyed building stackable objects with a deck of cards.

Lucy was an avid darts player at the P.A. Club, and won many trophies for her league play over the years. She was an auxiliary member of the V.F.W. Post No. 9261. She also enjoyed bowling in a league at the old bowling hall, and enjoyed playing Wii Bowling at Woodside. Later at Windemere, she advocated for a Nintendo Wii to continue to bowl.

Lucy also loved bingo, and had her own bingo machine, which she would play weekly with her sister Bobbie and friends at Woodside. While at Windemere, she always looked forward to the bingo games, and won several Beanie Babies and other stuffed animals.

Holidays and birthdays were special times for her. She would start shopping for Christmas in July, as she had so many people she wanted to give to. She was always so generous and thoughtful, and never left anyone out. She always wanted to see pictures of her children, grandchildren, and great grandchildren, whom she took such great pride in.

She decorated for every holiday, and loved dressing up for Halloween. She especially liked Valentine’s Day, Christmas, and the Cardinals, as she was known to love the color red. Lucy was so happy when she finally got her red car. Lucy also enjoyed watching “I Love Lucy,” Western movies, Hallmark Channel, “The Waltons,” collecting Beanie Babies and knickknacks, and listening to Elvis Presley. She was a woman with a few nicknames, such as “Lucy Goosey” and “Aunt Tootsie,” and usually said “Toot-a-loo” instead of goodbye. Lucy will be sorely missed for her smile, great sense of humor, and her joking around.

A special thanks to the Vineyard cCommunity, Woodside Village, Martha’s Vineyard Hospital, and Windemere Nursing & Rehab staffs for all their support, caring, and compassion throughout the years.

A graveside service will be held on Saturday, May 4, in the Old Westside Cemetery, corner of Cooke Street and Pease Point Way South, Edgartown, at 10 am, officiated by the Rev. Michael Nagle. Please wear something red; it was Lucy’s favorite color.

A celebration of life will follow at the P.A. Club in Oak Bluffs at 11 am; please bring a dish to share.