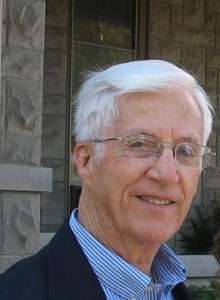 Bill was born on May 18, 1935, in Vineyard Haven, the son of William E. Carroll Sr. and Alexandra (McLellan) Carroll. He graduated from the Tisbury High School in the class of 1953. He was also a graduate of the University of Massachusetts Amherst, class of 1957.

After graduation from the University of Massachusetts, Bill embarked on a 26-year career in the U.S. Air Force. His career spanned many stops around the country, from Alaska to Florida to California, and several points in between. Along the way, he earned his master’s degree in electrical engineering from the University of Wyoming in Laramie, and held several different aerospace engineering positions. He embraced the nomad life that the Air Force provided him, learning to snow-ski in Alaska and water-ski in Florida, becoming a rodeo fan in Wyoming, and a golfer in Ohio. Bill retired from the Air Force holding the rank of lieutenant colonel in 1984, and went on to a second career at Boeing, working mainly in missile defense until his retirement in 1999. In retirement, Bill enjoyed spending time sharing his grandchildren’s activities with them, volunteering with the American Legion, improving his golf game, and spending leisurely days on the Island with his wife Tarzie. Bill was a devout Catholic, and active parishioner of St. Augustine’s Church in Vineyard Haven.

He was married for 62 years to Leslie “Tarzie” (Look) Carroll. Bill was the father of William ‘Bill’ E. Carroll III (Laura) of Oak Park, Calif., and Patricia “Patsy” Bryant (Leon) and Susan Puka (John), both of Dayton, Ohio. He is survived by brother Michael Carroll and sisters Madeleine Carroll and Nancy Carroll, all of Vineyard Haven; and Christine Blanthorn of Pembroke Pines, Fla. Bill was predeceased by his brothers Thomas Carroll and Leigh Carroll, and sister Margaret Schultz. He leaves behind six grandchildren and five great-grandchildren.

A visitation period will be held in the Chapman, Cole and Gleason Funeral Home, Edgartown Road, Oak Bluffs on Tuesday, May 14, from 9:30 to 10:30 am. His funeral Mass will be celebrated in St. Augustine’s Church, Franklin Street, Vineyard Haven, at 11 am. Burial will follow in the New Westside Cemetery, Robinsons Road, in Edgartown, with military honors provided by the veterans of Martha’s Vineyard.

Donations in his memory may be made to the Martha’s Vineyard Cancer Support Group, P.O. Box 2214, Vineyard Haven, MA 02568, or to a charity of one’s choice. Visit ccgfuneralhome.com for online guestbook and information.