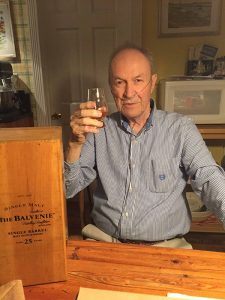 He was the consummate salesman, who loved people and loved the art of the sale. He began his sales career at the Colonial House furniture store in Bloomingdale, N.J. After several years in retail sales, he became a sales representative for several large furniture manufacturers. He then branched off into industrial sales, culminating in his retirement from W.W. Grainger in 2000. He was also very proud to have served in the U.S. Air Force, and was deployed to Europe in 1960 in support of the Berlin Crisis.

He and his wife Barbara retired to Martha’s Vineyard in 2001. There he took on many hobbies, including woodworking, furniture refinishing, and cultivating bonsai trees. He was a founding member and past president of the Martha’s Vineyard Bonsai Club. He made many of his closest friends at the club, which is still very active today.

He was always the life of the party, and he loved to entertain. He and Barbara hosted numerous gatherings at their homes in New Jersey and on the Vineyard. He was a beloved husband, father, and grandfather, who will be forever missed by his family and all of his wonderful friends.

A memorial Mass will be celebrated at Grace Episcopal Church, at the corner of Woodlawn and William streets, Vineyard Haven, on Saturday, June 1, at 11 am. Burial will follow in the Memorial Garden of the church, where his beloved wife was also laid to rest.