Grace Duart, affectionately known as “Granny” to her large, loving family of grandchildren and great-grandchildren, and “Auntie” to many more, graduated to heaven, dying on July 22, 2019. She had just reached the age of 101, was remarkably mobile — going up and down stairs on her own — very social, and was described by her daughter Louise Ann DuArt as “sharp as a tack.” Only hours before dying peacefully in her sleep at Martha’s Vineyard Hospital in Oak Bluffs, she was checking email on her iPad. 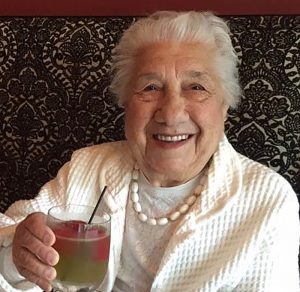 Grace was born Grazia Ricciardello in East Boston on June 27, 1918, one of two daughters and six sons of Louis Ricciardello and Michalina Mastromarino Ricciardello, both of whom emigrated to America from Italy.

In the 1950s, Grace met Herbert Duart while visiting her sister, Louise Ricciardello, a teacher on Martha’s Vineyard who was dating George Figueiredo. Herbert was George’s best friend. Subsequently the two couples had a double wedding in Boston, and lived close to each other most of their lives in Quincy, where Herbert and Grace raised two children, Edward and Louise Ann. For many years Grace was a bookkeeper and active in local politics.

Grace enjoyed travel, and often accompanied her daughter Louise DuArt, a noted comedienne who co-starred on tour for over a decade with Tim Conway and Harvey Korman. She loved her Boston Patriots and the Red Sox, and knew every player’s name.

Grace will always be remembered as the “life of the party.” When she turned 100, she had three big shindigs, and was celebrated by four generations of family and friends.

She survived cancer twice, and said she did so by accepting her doctor’s advice. “You have to be strong,” she counseled. “If you feel sorry for yourself, it disrupts the other things in your life.”

Since November 2016, Grace lived with her daughter Louise and son-in-law SQuire Rushnell in Edgartown. Every Christmas she would prepare her homemade ravioli and pizzelle cookies for family and neighbors, and found joy in sharing with others her experiences in living 101 years. When asked her secret to longevity, she simply said, “I am loved.” Granny was loved indeed! She blessed everyone whose lives she touched, and will be missed by her many friends and family.

A private graveside service will be held by the family on Martha’s Vineyard, Oct. 19, at Vineyard Haven’s Oak Grove Cemetery.