Aquinnah selectmen agreed to write a letter of commendation to the Aquinnah Police Department for “a terrific job” in resuscitating a man in the Philbin Beach parking lot.

“Last Monday afternoon, a little after 5 o’clock, a call came in originally as a 73-year-old male with chest pains. However, Sgt. [Paul] Manning and I responded and found out that the 73-year-old man was on the ground, not breathing,” Belain said. “We performed CPR and used the defibrillator. Deputy Chief [Gordon] Perry showed up and assisted us with defibrillation.”

Belain said “as luck would have it,” the Aquinnah ambulance was out of town on its way back from another call.

“We had to wait for [the ambulance] to arrive. But long story short, as far as we know, the individual did survive, and is still recovering in a Boston hospital,” Belain said.

Belain said Tri-Town Ambulance Chief Ben Retmier told Aquinnah Police that, had it not been for rapid CPR response and defibrillation, “things could have turned out differently.”

“I am assuming that, as the individual continues to recover, there will be more commendations in the future,” Belain said.

“I think it was wonderful what you guys did,” selectman Jim Newman said.

Aquinnah Fire Chief Simon Bollin said he is “very proud” of Perry for his valiant act. “It was a great team effort between the two departments,” Bollin said. “It was the first time Perry had to do CPR on a real person. You can train a million times for something, but when it happens in real life, it’s a whole different situation.”

In other business, town administrator Jeffrey Madison met with a representative for the Cape and Vineyard Electric Cooperative about locating a vehicle charging station at the corner of the parking lot at the Aquinnah Town Hall, and potentially one at the Cliffs.

Belain said he wouldn’t want people parking for extended periods of time at the Cliffs to charge their electric cars.

Newman said he would rather have two chargers at the town hall than have one up at the Cliffs. 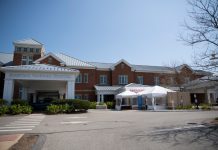