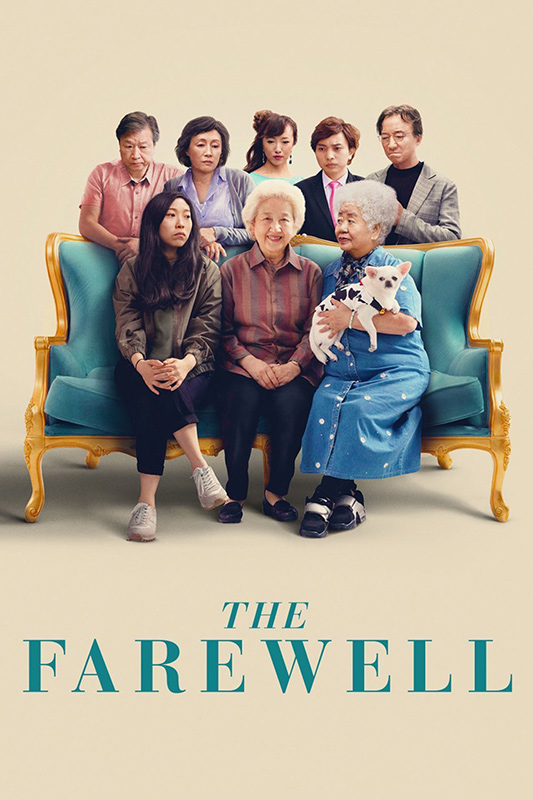 The story of a Chinese family and their dying grandmother, “The Farewell” comes to the M.V. Film Center on Friday, August 16. Dying doesn’t seem like a very cheerful subject, but director Lulu Wang tells this story with enough warmth and affection to make the film an appealing look into another culture.

The film opens with Billi talking to her grandmother Nai Nai (Shujhen Zhao), and — oops — there comes first of many little white lies. When Nai Nai (Mandarin for grandma) asks if her granddaughter is wearing a hat for the cold, Billi answers, “Of course,” even though she isn’t. Nor does Nai Nai share the fact that she’s at the hospital for tests. Played by the rapper Awkwafina, who was a hit in both “Ocean’s 8” and “Crazy Rich Asians,” Billi shares the spotlight with Nai Nai in “The Farewell.” An aspiring writer who lives in Brooklyn, Billi came to America with her parents at age 6, so she is as American as she is Chinese.

Lies make up the central theme of “The Farewell,” which is based on Wang’s actual experience, first shared in an episode of NPR’s “This American Life.” Billi quickly learns that her grandmother has Stage Four lung cancer and is not expected to live more than three months. Billi’s mother Jian (Diana Lin) and her father Haiyan (Tzi Ma), warn Billi that she is not to breathe a word to Nai Nai about her impending death. Everyone in the family knows, but not Nai Nai. Billi is not happy about hiding this information from her beloved grandmother. But, as her uncle explains, unlike in the West, one’s life is considered part of the whole in the East. In Chinese culture the dying are to be protected from the knowledge of their mortality.

This family has manufactured the perfect ruse for their farewell to Nai Nai. Billi’s cousin Hao Hao (Han Chen) will marry his girlfriend of three months, and everyone will gather in their home city of Changchun for the wedding. That way Nai Nai can spend her final days happily ignorant. Billi’s parents advise her not to attend on the grounds that she’s too emotional and won’t be able to sustain the lie. Billi maxes out her credit card and shows up anyway. It becomes clear that Nai Nai rules the roost, and she shows few, if any, signs of illness. She has arranged a festive wedding banquet for her grandson, suggesting that the family pretend the couple has been together for a year to make it look less pregnancy-precipitated. Gently badgering her granddaughter about her single state, she assures Billi she’ll organize an even bigger wedding banquet for her.

Many details enrich this portrait of a vital family and the world they live in. A quick scene of a room full of seedy-looking mahjong players suggests the hotel where Billi and her parents are staying is a little shady. Billi has a massage that includes cupping, leaving dark round circles on her back. After a small bird sits in Billi’s Brooklyn apartment, another one appears in her hotel room. Nai Nai enlists Billi to do Tai Chi with her, and Billi finally confesses she didn’t get the Guggenheim Fellowship she’d applied for.

When Nai Nai goes to the hospital, the family, fearing the worst, rushes to be with her. But she insists she just wants to change the medication she’s taking for a cough left over from an earlier ailment. When she finds out that the attending physician, who speaks English, isn’t married, she quickly sizes him up as a romantic prospect for Billi. The wedding banquet serves as “The Farewell’s” grand finale, with excessive smoking and drinking, as well as plenty of food and a few maudlin speeches. Billi and her parents head home, and the Nai Nai they leave behind hardly seems on her last legs. The message is clear. Nai Nai does just fine without knowing about her coming demise.

Information and tickets for “The Farewell” and other films playing at the Film Center, the Capawock, and the Strand theaters are available at mvfilmsociety.com. Information about films showing at Edgartown’s Entertainment Cinemas is available at entertainmentcinemas.com.

A conversation with two witty comedians in ‘The Trip to Greece’