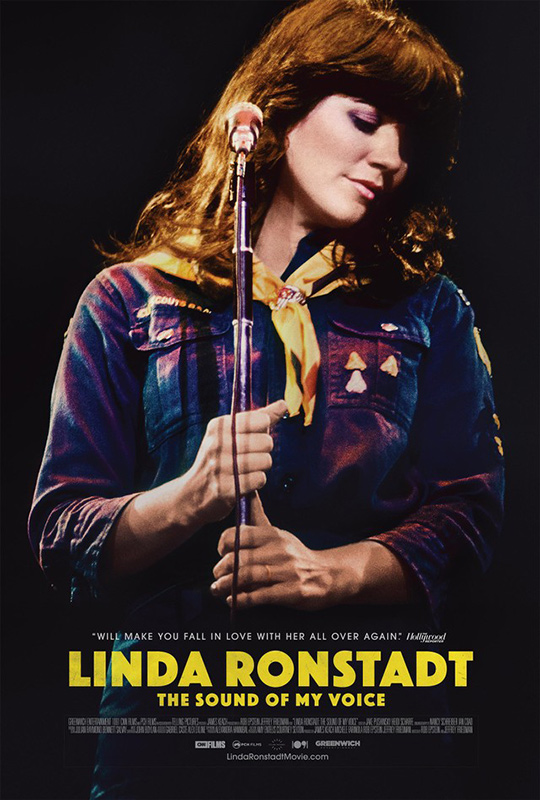 “Linda Ronstadt: The Sound of My Voice” tells the story of one of our most successful living recording stars. It plays at the M.V. Film Center Friday, Sept. 13. When he gave her a National Medal of Arts at the White House in 2014, Barack Obama confessed to having a crush on her as a teenager. Co-directors Rob Epstein and Jeffrey Friedman are both documentary Oscar winners, Epstein for “The Times of Harvey Milk” and “Common Threads: Stories from the Quilt,” and Friedman for the documentary short “End Game.”

This remarkable singer, now 73, ruled the music world in the 1970s. Growing up on a ranch outside of Tucson, Ariz., 40 miles from the Mexican border, she says she thought people sang in Spanish and spoke in English. She came from a musical family with a Mexican-German father who was an inventor as well as a singer.

Ronstadt’s breakthrough came in 1967, after she moved to Los Angeles at 18 and recorded an instant folk hit, “Different Drum.” At the time she was part of a trio called the Stone Poneys. Michael Nesmith of the Monkees wrote the song, but Ronstadt changed the gender to make it apply to women. She became a star at a time when there were few female singers, and, in 1975, she was the first female to appear on the cover of “Rolling Stone,” in a photo taken by Annie Leibovitz. The record company that signed her decided she should perform solo. She began touring as the opening act for Neil Young, among others, singing, “When Will I Be Loved.” Nobody filled an arena like Ronstadt, according to Young.

While Ronstadt was not a songwriter, she made the cover songs she performed belong to her. Examples include “Blue Bayou” by Roy Orbison, and “Don’t Cry Now” by J.D. Souther, who became her longtime boyfriend. A modest, unassuming performer, she said, “Every song had a face that I could sing to.” Nevertheless, she was the first artist to have a song on three charts, R&B, country, and rock. She earned five platinum albums in a row.

She and two-time former California Governor Jerry Brown lived together for a number of years. Questioned about whether their relationship was political, she insisted, “He did politics; I did music.” Emmy Lou Harris, Dolly Parton, and Ronstadt became close friends, and the three of them made two albums, “Trio” (1987) and “Trio II” (1999) together, which were called among the most successful collaborative albums in the last half of the 20th century.

Ronstadt explored many different music genres. After her early success in folk-country and country-rock, she became equally successful singing rock music. Inspired by her mother’s love of show tunes, Ronstadt joined Kevin Kline to star in Gilbert and Sullivan’s light opera, “The Pirates of Penzance,” on Broadway, winning a 1981 Tony nomination. From there she moved on to a series of pop standard albums with composer and bandleader Nelson Riddle. “These are songs I cannot not do,” she said. Delving next into her Mexican roots, she performed mariachi music, and her first Mexican-influenced album was called “Canciones de Mi Padre,” in tribute to her father.

Ronstadt performed in her last concert on Nov. 7, 2009, and two years later she was diagnosed with Parkinson’s Disease. No longer able to sing, she remains a performer who will go down in history as one of the all-time greats.