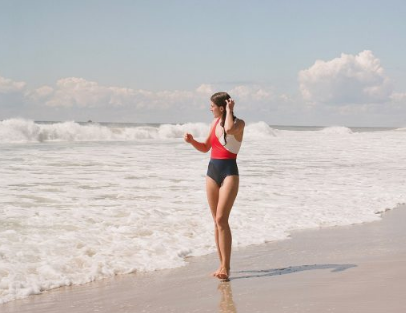 As most of us know by now, climate change is a real thing. And for many of us, it can be overwhelming. Or, maybe the better word is “paralyzing.” This is the word that former New York Times journalist and author (and seasonal resident) Tatiana Schlossberg uses when we talk about her new book, “Inconspicuous Consumption: The Environmental Impact you Don’t Know You Have.”

These days, the more we know, the more it feels like living with an environmental conscience is getting harder and harder. For example, a single pair of jeans can use up to 2900 gallons of water to make. (This scary factoid is from an EPA blog by Deb Berlin. Or read Tatiana’s chapter Thirsty for Denim.) A Netflix show (Great British Baking Show, duh!), depending upon where you live,  can be a coal burning activity. (Read the Technology and the Internet section of Tatiana’s book.). The food we buy — particularly things like the occasional off season pint of blueberries from Mexico sold in a plastic container — is problematic. (It takes a tremendous amount of fuel to get it here. And of course the plastic container will probably not get recycled.) And then, how we move — by ferry, car, train and plane — also contributes to our oversized carbon footprint.

Paralyzing is right! So what do we do? What can we do?

“So much of the way climate change has been written about and discussed has made people feel guilty and they turn away from the problem,” Tatiana tells me. But, as a fellow journalist, mother, voter, and human being, I couldn’t agree with Tatiana more when she says, “Climate change is the issue we should all be talking about.”

So, on the eve of her leaving to travel around the country to talk about her work — she, like many of us, is conflicted about air travel — Tatiana took some time out to talk to me about her work and, of course, food.

“The narrative of personal responsibility has been destructive because it has let fossil fuel companies, large corporations, and climate deniers off the hook. I wanted to point out that while we all participate in these systems, we didn’t set them up and we can’t trust our current leadership to fix them. So, we don’t need to feel individually guilty, but we do need to feel collectively responsible for building a better world. In this book, I tried to give people information to help them think about how to solve these problems in the best, most just ways.”

I must pause here and interrupt reporting on the conversation and note that as a reader, I did feel empowered by Tatiana’s work. And I was not nearly as depressed as I was after reading Drawdown, which is another excellent and important book that maps out solutions for climate change mitigation. Page by page in Tatiana’s book, there are at least five I want to remember that and facts that I can use.

One of the most staggering facts is our global population rise. By 2040, we will be 9.3 billion strong globally. Tatiana speaks to this: “It is hard to get 7 billion people to do anything. We need regulations and laws to steer us all in a better direction.”

But before I get to what she has to say about these laws and what we as citizens can do together, I have to pause and check in on what she is doing. How does she regulate her life? Did these facts change her approach to living? Does she still eat red meat? Does she order online?

“Overall, I try to shop and order online less. I ask myself: Is this a need or a want? I don’t cook red meat at home, but sometimes I will have it in a restaurant. I offset my travel, which is a luxury.” She pauses, “I try to live in line with my values.”

One thing she does value is voting and legislation. Inconspicuous Consumption is divided into four main sections: Technology and the Internet, Food, Fashion, and Fuel; along with a conclusion. Each section exposes where we can legislate and vote for better systems. In the food section, she points out that one of the largest creators of greenhouse gas emissions is food waste. According to the USDA, we throw out an estimated 31 percent or 66.5 million tons of our food a year. And, much of that is because of our food labeling system, or lack of it. Tatiana writes, “The USDA has limited the wording for labels on meat, poultry, and certain egg products to specific phrases — packing date, sell by, or use before — but none of these terms has ever been legally defined or standardized by regulation.” Essentially, the U.S. Government has been futzing around with the idea of food labels for 40 years, but there are no national laws about dating foods. Our food labeling system has nothing to do with microbiological safety: It is completely arbitrary. By Tatiana’s math, the resulting food waste accounts for “21 percent of freshwater use, 18 percent of cropland, 18 percent of all farming fertilizer, and 21 percent of all the waste going into landfills, which releases methane.” By the way, methane is a greenhouse gas 21 times more powerful than carbon dioxide.

Tatiana laughs, “It’s pretty incredible. I was amazed to learn about that. I no longer set any store in that system.”

Congresswoman Chellie Pingree (D-Maine), co-chair of the Bipartisan Food Recovery Caucus echoes this, “Estimates indicate that around 90% of Americans prematurely throw out perfectly safe food, in part because of confusion about what date labels mean; meanwhile 38.4 million Americans are food insecure.” In August, she and her co-chair Dan Newhouse (R- Washington) reintroduced a bill (that stalled in Congress in 2015) which will try again to address this issue. This is something we can support, and it is bi-partisan!

Another area that Tatiana addresses in her Food section is the way we grow and ship food. She writes that large scale agriculture has and will continue to “deplete soil nutrients, drain and pollute aquifers.” Currently, only 1 percent of global agriculture uses organic practices. Then there’s the way we all get our produce. “In 2017,” she writes, “we received 111.6 million tons of asparagus, tomatoes, and more, burning dirty fossil fuels, mostly on cargo ships, polluting the water, releasing greenhouse gases, and adding to ocean acidification.”

I mention the Green New Deal. “Yeah, I am looking forward to seeing more concrete policies grow out of that. What I am a fan of is that they are willing to be radical and to change the idea of what we think is possible. We can no longer live in one place. Our lives are connected to and affect people all over the world. It’s really easy to think, ‘Oh these environmental regulations don’t have anything to do with us.’ We might think the Endangered Species Act is just about cute fuzzy animals, but the benefits from that regulation and others redound to us in so many ways — better biodiversity, clean water, and preserving tourism and recreation. The natural world provides us with all these benefits. This is why we need to be constantly vigilant about our environmental laws. Things don’t just happen.”

As we finish up our chat she says, “You know, I wanted to write a chapter on fishing because it was relevant to everything I was writing about with food, but it was also personal. After spending so many summers on Martha’s Vineyard, I’ve heard about the waning fish stocks, seen that there are fewer striped bass, and more trawlers around Nomans Land. It is powerful to see those changes firsthand. This isn’t a distant problem. We can see these changes in our lives and lifetime.”

If you want to get involved in climate change mitigation here, check out the Island Climate Action Network, ICAN: islandclimateaction.org/. This group, comprised of about 315 Islanders and roughly 30 Island organizations, is the hub for all climate mitigation activity on Martha’s Vineyard. Find information about carbon offsets here: carbonfootprint.com/carbonoffset.html 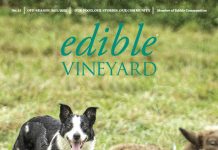