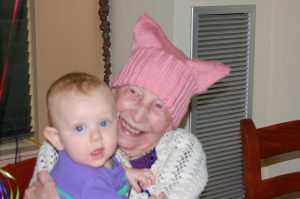 Alice-Jo grew up in Flint, Mich., and graduated with a B.A. from the University of Michigan, where she met her beloved husband, Robert J. Taylor. They went on to live throughout the Midwest and Northeast in this country, and spent two years in Tokyo, Japan, on a Fulbright.

She fell in love with Martha’s Vineyard in the 1940s while visiting her sister and brother-in-law, Shirley and John Painter, in Vineyard Haven. Alice-Jo and Bob always considered the Island their true home, and built a house in Oak Bluffs for their retirement. She gave much to this community: delivering Meals on Wheels, volunteering at the toddler center, being active at the Oak Bluffs Senior Center, helping establish Friends of the Oak Bluffs Council on Aging (FOBCA), and donating to countless local causes and charities.

Alice-Jo’s passions, beyond spending time with her family, were politics and the Boston Red Sox. In the spring, Alice-Jo was inducted into the Century Club for Boston Red Sox fans. She received this honor while wearing her pink “pussy hat,” which rarely left her head in the last years of her life.

Alice-Jo was a beloved mother of three, grandmother of eight, and great-grandmother of five. She was predeceased by her husband, Robert J. Taylor, and by her sister and brother-in-law, Shirley and John Painter. Locally, she leaves her granddaughter Eve Heyman, and Eve’s husband, Dave Tuminaro, of Oak Bluffs. She also leaves her niece, Jenny (Painter) Seward of Oak Bluffs, and Jenny’s children and grandchildren. She is survived by her three children, Joel Taylor of Ashland, Ore., Laurie Heyman of West Newbury, and Paul Taylor of Palo Alto, Calif. Her other grandchildren and great-grandchildren are spread across the country from Vermont to Ohio to California.

Services will be private. Memorial contributions may be made to any Vineyard charity of choice.