In the delicious early days of the school year, when the air is golden with late summer sunshine and the promise of new beginnings, the West Tisbury School garden is a magnet for students and teachers seeking respite from the indoor routine. It’s a haven for reading groups and lunch breaks, and wiggly bodies that crave less sitting and listening, and more doing.

Kindergarten teacher Teri Mello is quite familiar with the power of playing in the dirt. Not only has she spent the past 35 years teaching 5-year-olds, she is a gardener at heart, as is Victoria Phillips, the teaching assistant she´s worked with for the past 20 years, and they know how many valuable life lessons are learned when working the earth. Their kids are in the courtyard garden as often as possible, starting the first few days of school, picking apples and pressing cider, releasing butterflies that begin to hatch from the chrysalises raised in their classroom. But in early October, the formal education begins — harvesting sweet potatoes that were planted by last year´s class.

Teri leads the class outside to their raised bed; cheerful sunflowers smile down on her students, bright red cherry tomatoes weigh down their branches, begging to be picked. The courtyard garden is fully surrounded by the school, protected from West Tisbury’s most ferocious garden predators: deer and skunks and early frosts.

With patience and clarity unique to educators of very small people, Teri demonstrates the perfect combination of gentleness and effort required when digging for sweet potatoes. The kids are a little hesitant at first, even skeptical. But within minutes, they start to have success, and gain a little confidence. Suddenly, the garden erupts in a chorus of disgusted groans and delighted squeals, and Teri and Victoria smile at each other knowingly. Someone has found a worm, and now the harvest is put on hold while the creature is thoroughly examined and eventually moved to a safer location.

It may seem like a happy accident, a diversion from the classroom that happened to end in joyful garden discovery, but Teri knows that pairing the reward of fun and discovery with the work of digging is the best way to hook young gardeners.

Of course there are still some children who aren´t so easy to draw in with creepy crawlers. Which is why Teri pulls out her secret weapon after every lesson — tasting the veggies they worked so hard for. Teri believes that tasting is the most important aspect of garden education, with the widest appeal.

Katie Ruppell, of Island Grown Initiative, agrees. Since 2008, Island Grown Schools has employed garden coordinators in each of the Island´s schools — overseeing garden care and maintenance, teaching kids about food culture and politics, and nutrition and soil science. Kids can continue to learn about plants and food and dirt and worms, even if their classroom teacher’s skills lie elsewhere.

Teri and Island Grown Schools agree that a cornerstone of gardening outreach is food tasting – from school wide events, to classroom “eating the rainbow” units to sampling whatever is ready during a garden visit. These frequent, low pressure exposures to new foods have been proven to break down even the most vegetable-resistant picky eaters.

Back in Teri´s kindergarten, throughout the year, kids learn about saving seeds, cover crops and mulching. In the spring, they watch seedlings grow on trays in their classroom’s sunny window. Their knowledge expands as their skills develop, chubby hands learn to grip garden tools, and use a trowel without flinging dirt in their friends’ eyes.

They learn to notice the subtle seasonal changes — the days getting longer, the sun getting warmer, the importance of rainy spring days. They are learning the building blocks of how we feed ourselves, but they are also learning how to observe nature and make scientific predictions.

And as the school year draws to a close, they take one last trip to the garden to plant what will become next year’s sweet potatoes, for next year’s kindergarteners. Because under Teri and Victoria´s agricultural tutelage, they´ve already learned that growing food isn´t just about feeding ourselves, it´s about building — and feeding — a community.

The Best of Thanksgiving: stuffing and dessert 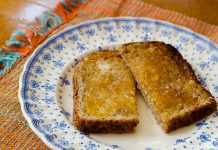