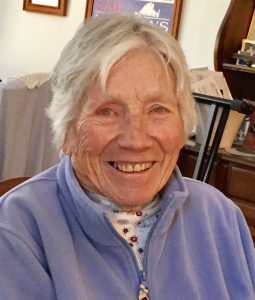 Barbara lived on Martha’s Vineyard for 44 years. She worked for nearly 20 years in the sporting goods section of Brickman’s in Vineyard Haven.

Barbara loved music of all kinds, and sang in the choir of several Island churches, including the Methodist church in Vineyard Haven. She and her friends were regulars at the Tabernacle sing-alongs in Oak Bluffs.

She loved the sea more than anything else, and felt she was fortunate to have spent so much of her life in a place where the sea was within a short drive of her apartment at Woodside Village.

Her family was, by far, her primary interest, and she was happy that she was able to be involved directly in their lives. Watching her family grow and having the grandchildren, then great-grandchildren to follow as they grew was pure joy to her.

There is not enough space here to write down the names of all of Barbara’s friends, but they were all held in high regard and loving affection in her huge heart that was always open and caring. To be sure, Barbara’s life was not absent of hardship, but few regrets were ever mentioned. Rather, she spent her life looking forward to tomorrow and the promise of a life everlasting.

Please join her family in a celebration of Barbara’s life at Woodside Village community room A from 3:30 to 5 pm on Sunday, Nov. 10.