George Rogers Sr., 97, died peacefully at his home in Vineyard Haven on Nov. 6, 2019. The family is grateful for the compassionate support by VNA of Cape Cod Hospice. 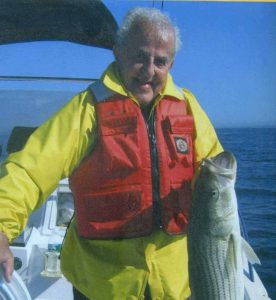 He was born in Vineyard Haven at his family home on Feb. 4, 1922, the son of Frank Rogers and Maria de Canha, who both emigrated from Madeira, Portugal, by way of Ellis Island in 1911.

A lifelong Islander, he graduated from the Tisbury High School (now known as the Tisbury School) in 1942, and immediately enlisted in the Navy to defend our nation in World War II. As a seaman second class, he was commissioned as a gunner in the gunnery division on board the battleship USS Baltimore, which participated in numerous bombardments of Japanese-held shorelines to support the successful landing and occupation of U.S. troops from 1943 to 1944. The USS Baltimore was one of the key strategic participants in the air-raid bombings on the Japanese island of Iwo Jima.

A favorite story that George often told about his service during WWII in the Pacific was the time he was asked by his commander to guard and protect President Roosevelt’s dog, named Fala, a Scottish terrier that always traveled with the president. George watched the dog while the president was having a top-secret meeting in Pearl Harbor aboard the USS Baltimore with his general and admiral.

Upon completing his tour of duty in the Navy in 1945, he returned to his beloved Island of Martha’s Vineyard, and worked for a local contractor as a carpenter. He met and married Florine Santos in 1950, who was born and raised in West Tisbury by parents who also emigrated from Portugal in the early 1900s. George and Florine Rogers celebrated their 69th wedding anniversary on Sept. 25.

With the birth of his four children in the early 1950s, George’s love for the seas led him to accept a job with the Steamship Authority. He eventually rose to the position of quartermaster, having the responsibility to operate the helm of the large ferry ships from port to port. 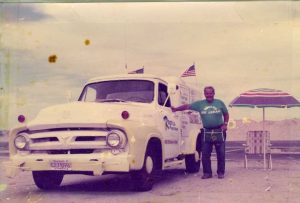 Upon his retirement from the Steamship Authority in the late 1970s, he was anxious to start his own business, and ultimately purchased an old Hood milk truck, and with town permits in hand, sold ice cream at Katama Beach and along State Beach for nearly 20 years. During that time, he took great pleasure in meeting people from around the world, but his greatest joy was bringing a smile to the faces of the endless lines of children who purchased ice cream from his truck stand on State Beach.

George was an avid fisherman, who participated in the original M.V. Striped Bass and Bluefish Derby that started in 1946, and continued to fish the shoreline and waterways of Martha’s Vineyard right up to the age of 90.

He was a devoted husband and father, who had a great love for the land and waters of Martha’s Vineyard. There was no other place he wanted to be than on this Island, to pursue his passion for boating, fishing, hunting, and shellfishing. Nothing gave him more peace of mind than sitting with a fishing pole in hand on a long sandy beach, or fishing from his boat at sunset along the north shore without a ripple in the water.

He had an exceptional love for vegetable gardening, and a tireless commitment to pass on to future generations his family’s tradition for raising large vegetable gardens, as well as cultivating lots of delicious raspberries.

George is survived by his wife of 69 years, Florine Rogers, and by his four children, Marie Baldwin of West Tisbury, Linda Rogers of Boston, George Rogers Jr. of Vineyard Haven, and Dennis Rogers of Edgartown. He is also survived by 11 grandchildren, and nine great-grandchildren. He was predeceased by his 10 brothers and sisters, Mary Pombo of Acushnet; Manuel Rogers of San Gabriel, Calif.; Lydia Silva of New Haven, Conn.; Frank Rogers of Edgartown; Olga Panagakos of Acushnet; Alice Duncan of Walnut Creek, Calif.; William Rogers of Oak Bluffs; Gloria Cory of Dartmouth; John Rogers of Vineyard Haven; and Eleanor Luce of West Tisbury.

Visiting hours will be held on Saturday, Nov. 9, from noon to 1 pm at the Chapman, Cole and Gleason Funeral Home in Oak Bluffs. A celebration of life service will be held at St. Augustine‘s Church in Vineyard Haven on Nov. 9 at 1:30 pm. Immediately following the church services, an interment will take place at the Oak Grove Cemetery in Vineyard Haven, officiated by Father Michael Nagle, with military honors provided by the veterans of Martha’s Vineyard. After the interment, friends and family are invited to join the family for sandwiches and refreshments at the basement of St. Augustine Church in Vineyard Haven. 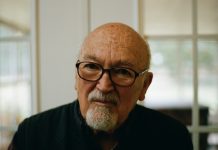 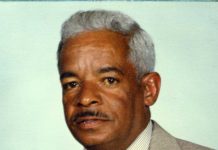