Thomas J. Rabbitt Jr., a lifelong resident of Vineyard Haven, entered into eternal life peacefully on Nov. 1, 2019. He was 84. 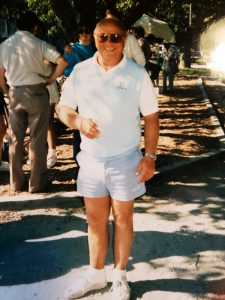 Tom was born at the family home on Daggett Avenue on April 23, 1935. He was the son of Thomas J Rabbitt Sr. and Bernice (Daggett) Rabbitt.

During his colorful life, he had a range of professions. In his youth, he worked as a tuna fisherman on the West Coast. He owned and operated Rabbitt’s Real Estate on Beach Road, and the Sandpiper Restaurant and Sandpiper Racquet Club on Main Street in Vineyard Haven. He coached the Martha’s Vineyard Regional High School boys’ tennis team, was head tennis pro at the Stuart Yacht and Country Club in Florida, and head tennis pro at the Island Inn Country Club in Oak Bluffs until his retirement in 2017.

For over 30 summers, Tom organized the Friends and Family of Mary Tucker Tennis Invitational in Oak Bluffs. Many Island youth and children of friends and family were taken under Tom’s wing to learn tennis. As well, he provided many youth with summer jobs at the Island Inn Country Club tennis courts.

His uniform of choice was a cap, polo shirt, cashmere sweater, shorts, and shoes with no socks … even in winter! If you were lucky enough to get a hug from Tom, you would know how soft his sweaters were.

He lived a full and rich life. He possessed charisma, charm, and a great sense of humor. He loved telling stories, a true raconteur, and held court both on and off the tennis courts!

He was a simple man in many ways, who loved his family and friends unconditionally. If you needed Tom — he was there!

Besides his passion for tennis, Tom loved being at home watching old Westerns and sports, reading his morning papers of choice, the Boston Globe and the Cape Cod Times, playing poker with his buddies, and reading.

His favorite sayings, “Just you and me,” and “It never rains on my courts!” will linger in the ears of many.

Tom was predeceased by his much-loved sisters, Marjorie Rusbosin, Winifred Kittila, and Dorothy Coggins, and by his brother, Owen J. Rabbitt. Tom is survived by his loving son Paul Rabbitt and his wife Margarida DeOliveira, Paul W. Rabbitt (grandson), Theodore M. Rabbitt (great-grandson), and his dear sister Esther Cummens. In addition, he leaves behind a family of adored nieces and nephews, as well as a vast network of close friends from around the country.

Tom will be truly missed, but his light will shine eternally over his beloved Martha’s Vineyard!