Jean Gatting, 100 and a half (noted because half counts a lot more after 100), died peacefully on the morning of Feb. 6, 2020, after a lifetime of laughter, lively conversation, quilting circles, bingo, and an affinity for all living things. From a family of farmers, her favorite days were spent with the sun at her back and her hands in the dirt, growing flowerbeds that would stop passersby, and loads of vegetables that became wonderful summer suppers. The birds were her background music. She carried her love of gardening to the Vineyard, planting, weeding, and hoeing for as long as she could, and when she tired, directing from her porch rocking chair. 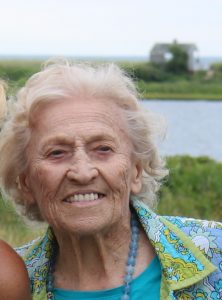 Jean grew up on a large farm in Connecticut, in a close family of 11 children. She was the last sibling standing of five brothers, Frank, Aleck, Walter and Charles Murkowicz and her twin brother Michael Murkowicz, and five sisters, Mary Christensen, Christina Elder, Kathryn Gatting, Helen Pascoe and Bertha Talbot. She would have replicated this large family if she could, but instead she opened her home to foster children of all ages, ethnicities, abilities, and disabilities, taking in more children than one can remember. Sometimes they stayed for several nights, while many had a home for years. The rest of the family never quite knew what they would come home to after school, creating an atmosphere that celebrated adventure, adaptability, and diversity. People in the grocery store would look on in curiosity and wonderment at the rainbow of children surrounding Jean; it always kept life interesting.

She spent many happy, engaged years at the Martha’s Vineyard Center for Living, where she was said to be the life of the party. In lieu of flowers, she would have been pleased to have donations made in her memory to the Center for Living, P.O. Box 1729, Vineyard Haven, MA 02568, or online at mvcenter4living.org/donate.

Jean was predeceased by Charles Gatting, her fun-loving husband of 50 years. She is survived by three daughters, Ann-Marie Ely of Windsor, Conn., Carlene Gatting of Edgartown and her husband Fred Condon, and Aida Sorkin of Boston and her husband Steven Sorkin, as well as her adoring grandchildren, Matthew and Melissa Sorkin, Alexis and Mackenzie Condon, and Shinelle Baker.

A celebration of Jean’s well-lived life will be held at the Federated Church, South Summer Street in Edgartown, on Feb. 22 at 11 am, followed by a luncheon at the Harbor View Hotel. All are welcome.