It is with great sadness that we announce the passing of Sophie “Shelley” (Katz) Cohen. Shelley passed away peacefully in her sleep surrounded by family at the Yarmouthport home she shared with her daughter and son-in-law, Rhonda and Stephen Silverman on April 23, just a month short of her 96th birthday. She was married to Benjamin Cohen, who passed away in 1985. 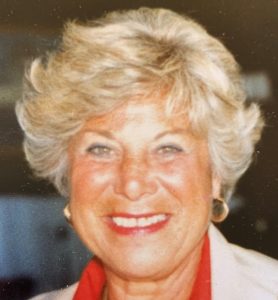 Shelley was born in Dorchester in 1924 to Abe and Rose Katz and was one of 10 brothers and sisters.  She graduated Jeremiah Burke High School in 1942 and went to work as an administrative assistant/bookkeeper. She married Ben in 1945. After living in Brockton, they moved to Framingham in 1950 and then to Hyannis in 1959. The family home remained in Hyannis until 2011, when Shelley moved in with her daughter and her husband in Yarmouthport.

She was always devoted to both her immediate family and her many brothers and sisters and in-laws and their children as well as her many friends.  She, along with her husband, were very dedicated to their children’s development and inspired them to pursue public service careers. Her grandchildren and great grandchildren were also a great source of pride and joy.

Shelley was a huge, multi-faceted resource to her husband and his brother, George Cohen, who partnered in businesses which included army-navy surplus and then a clothing store on Circuit Avenue in Oak Bluffs starting in 1949 as well in Framingham known as G & B Clothing. From 1949 and through the 1950’s Shelley and Ben and their children spent the summers in Oak Bluffs to operate what was then a seasonal business. In the 1960’s, the family made Oak Bluffs their sole location for their businesses, began operating them year round and added a furniture component and a motel. The “G & B” retail building on Circuit Avenue, which now is comprised of many long time retail tenants, remains under family ownership, the last 25 years under Shelley’s management along with her children.

Shelley’s commitment and contributions went well beyond her family and the family business. As early as her teenage years she entertained and moved many in the Jewish community acting and performing in Yiddish for the Workmen’s Circle Theater group in Boston. Her commitment to the Jewish community, both locally and in Israel, continued as an adult. She was president of the Framingham chapter of Hadassah in the 1950s, when the chapter received an award for the largest increase in membership of any chapter in New England. After moving to Hyannis, she became one of the founders and the first president of the Cape Cod chapter of Hadassah. She also served as the advisor to the Cape Cod Synagogue youth group.

Shelley used her business acumen and community commitment in other ways as well. Shelley, along with Marjorie Robinson, as co-founders and owners of Diet Watchers of Cape Cod, supported and mentored many Cape Codders, young and old alike, to achieve a healthy weight and lifestyle.

She also found time to pursue many interests and hobbies. She was an avid gardener. She was well known for her cooking and baking and loved to entertain. She was a champion Bridge player and was a member of the same book club for over 60 years, both of which she was active in past her 95th birthday.

In addition to her daughter and son-in-law, she is also survived by her son and daughter-in-law Richard and Alison Cohen of Oak Bluffs; and her grandchildren and their spouses, Theodore and Elena Silverman of Newton, Adrienne and Paul Boudreau of Niantic, CT, Alexander and Deborrah Flinner-Cohen of Oak Bluffs, and Benjamin and Jessica Nickerson Cohen of Franklin. Shelley was the much beloved great grandmother of Genessa and Callie Silverman and Rose, Rowan and Wesley Boudreau. She is survived by siblings Merle Ratner of Canton, Claire Stearns of Needham, and Paul Katz of Dedham as well as numerous nephews, nieces and great nephews and nieces and other relatives.

Due to the COVID-19 restrictions, private funeral services were held on April 24. A celebration of Shelley’s life will be held at a later date for family and friends to gather and share memories of a life well lived.

The family wants to extend their utmost gratitude to Shelley’s wonderful caregivers Sherene Bent and Nicole Newell who provided her compassionate and loving care for the past months.

Shelley’s love and her devotion to her family and friends and her accomplishments will remain her legacy. Donations may be made in her memory to the Cape Cod Synagogue 145 Winter St., Hyannis, MA  02601 and/or Hadassah 1320 Centre Street, Suite 205, Newton Centre, MA 02459