Roberta Lea Hutchison passed away quietly in her sleep, with her life partner John and her velcro Havanese Watson by her side, on June 1, 2020. 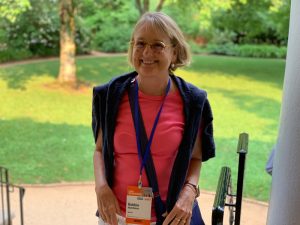 Robbie was born in Lincoln, Neb., on Jan. 2, 1957, but moved to northern Virginia with her family at an early age. Her early hobbies and interests included Girl Scouting, ballet, and sewing, which she learned from her mother.

She graduated from Herndon High School with the class of 1975, then attended the University of Virginia. One of her proudest achievements was earning a B.S. degree from UVA in environmental science, a very new discipline in 1979. She began work as a software engineer, and obtained a master’s degree in computer science soon afterward, from George Washington University.

In 1988, she married her sweetheart, John Hartley. They were married the rest of her life.

In the mid-’90s, Robbie decided to change careers, and went back to GWU. Through many hours of classroom and field training, she became a landscape designer without equal.

She and John then fulfilled their dream, and moved to the the Island of Martha’s Vineyard. There, for the next 18 years, she helped create breathtaking gardens and vistas in every corner of the Island. Her contributions and designs will be enjoyed for decades.

The couple retired to Naples, Fla., in 2017, planning on a long, quiet retirement. Robbie attended the two-year-long Greater Naples Leadership masters program, and graduated in the class of XXIII. Her adult interests always included science, nature, and community service.

She began her unfortunate journey with breast cancer in 2012. Despite world-class treatment at Massachusetts General Hospital, the cancer progressed, and eventually spread.

She is survived by her loving husband John, and by her father and sister.

She requests donations be made to Silent Spring Institute in Newton, or simply, “Go plant a tree. Any kind. Anywhere.”