Cathy Walthers is not a vegetarian. Though she has authored numerous cookbooks on such topics as greens, kale, and salads, Walthers is a broad-based foodie, through and through. “I love all kinds of food,” she says. “I’m trying to go more plant-based, but I don’t want to give up anything.”

Walthers believes that food tastes different depending on where and how it’s grown. “I always gravitate toward locally grown food,” she says. “It’s going to be healthier and probably taste better, because it’s fresher and hasn’t traveled so much.” She tells a story of a woman she once wrote about who introduced her to heirloom tomatoes: “She gave me a taste of an Italian San Marzano tomato from her garden, and it was the best tomato I’ve ever tasted in my life.” It was, she says, like the essence of tomato, and notes that this kind of flavor is what chefs are always seeking. “Sometimes I think that when people enjoy things I’ve made, it’s not the recipe, but the quality of the ingredients. It’s the real taste of food.”

Growing up outside Boston, Walthers was fascinated by food from an early age. In an era (the 1960s and ’70s) when many American families were relying on frozen and processed food, Walthers’ parents had a vegetable garden, and would take family outings to pick blueberries and apples. When her parents would ask what she wanted for her birthday, she’d request dinner at one of Boston’s high-end restaurants. Her grandmother lived in Manhattan, upstairs from Le Périgord, a classic French eatery. “Pretty much every time I was visiting, I would beg her to go there. I was really interested in the food of New York City. My whole life has just really been about food.”

Several of the steps along the path to Walthers’ becoming an expert on greens were accidental, or at least serendipitous. “I looked up the word ‘serendipity,’” Walthers says, “and it’s defined as ‘the occurrence and development of events by chance in a happy or beneficial way.’” She acknowledges that happy chance has played a frequent role in her cooking career.

First, there was her entry into cooking professionally. In 1994, having earned a master’s degree in journalism from Boston University and worked her way up to a managing editor position at Tab Communications in Boston, she decided to take a year off and “think about things.” She enrolled in an eight-month vegetarian chef’s program at the Natural Gourmet Institute in New York City. “When I walked in the door,” she remembers, “I knew that this was what I should be doing.”

After completing the program, she got an assignment to write a magazine article about kale and collard greens. “I did all this research,” she recalls, “and there was just nothing about them — no recipes, no cookbooks, maybe one or two articles about Southern collard greens, or the use of kale in Italy, but nothing else. A light bulb went off in my head.” That lightbulb led to her first cookbook, “Greens Glorious Greens!” published in 1996 and co-authored with her good friend and cooking mentor, Johnna Albi. “The book is A-to-Z greens,” she says. “We had a chapter on kale way before people were talking about kale, before there was any such thing as a kale chip. We spent a year just exploring and writing recipes; we had chapters on bok choy, watercress, wild greens.”

Walthers’ kale cookbook (“Kale, Glorious Kale,” published in 2014) also had a serendipitous start. “I wanted to write a cookbook on cocktails,” says Walthers. But after spending a year developing a book proposal and sending it to multiple publishers, no one picked it up. “And then,” Walthers says, “this one publisher came back and said, ‘We’re not interested in this, but we see your background, and we’d like you to write a book on kale.’ So I was drawn back into greens again.” Walthers laughs when she relates that creating a cookbook generally involves several months of daily experimentation with recipes. “I guess this was the Universe saying that it would rather have me spend every night eating kale than drinking cocktails.” She has also authored two other cookbooks, Raising the Salad Bar, and Soups + Sides.

In addition to writing cookbooks, Walthers works as a private chef and food journalist. Her first assignment with Martha’s Vineyard Magazine, in 2003, came as a fluke. The editor had a food article drop out of an issue at the last minute. Someone mentioned Walthers, and the editor asked her to write something in a week. “I didn’t have time to interview people,” says Walthers, “so I thought, Watercress; that might interest people, and I could do it from heart because I’d been picking for a couple of years, and I had a ton of recipes. I turned the piece around in a couple of days, and I went on to write almost full-time for the magazine for 10 years.” Watercress, Walthers notes, “adds a lot to your nutritional intake.” She uses it in soups and as a salad green, and sometimes substitutes it for parsley, chopping it up and throwing it into grain salads and potato salads, or mixing it with plain foods like pasta or beans to add color and zing.

On the side, Walthers has spent considerable time working in the Slow Food movement and organizing food festivals on such topics as beekeeping, how to make your own cheese, and raising goats. She’s particularly proud of a festival she produced on stinging nettles, a wild and exceptionally nutritious green easily found in the Vineyard wilderness. “We called it the ‘Heavy Nettle Fest,’” says Walthers, “and we held it at Felix Neck. I don’t think anyone had ever done a nettle festival before, certainly not on the Vineyard.” The event included classes and a wild foods walk, and the 100 or so attendees were offered pots of nettles to plant in their home gardens. Another of Walthers’ favorite festivals was the Kale Fest she put on at Mermaid Farm. “It gave me a chance to pass along information and do something fun,” she says.

Recently, Walthers has been fascinated by a subgroup of greens: herbs, which she notes are loaded with nutrition, and often mild enough to be added to food by the handful. She enjoys sitting in her own herb garden and noticing all the different shapes and shades of green. “The everyday herbs we cook with have been used throughout history for medicinal purposes,” she says. “There’s a lot we don’t even know about that these greens offer us … I feel it on an intuitive level when I’m cooking with them.” Walthers thinks about possibly writing an herb-oriented cookbook, and in the meantime, she’s been giving talks about herbs, and sharing recipes. “When I focus on something and learn about it,” she says, “I try to share it with people. I think it’s my job to be an educator, to share what I’ve learned.”

Roasted Salmon and Greens Dinner Salad
This is a favorite new dinner salad recipe. Make this ahead with any baby greens you have available, and have the easiest, fresh, casual dinner possible. Everyone loves this salad. Serves 4.

Preheat oven to 400°. Line a rimmed cookie sheet with parchment paper (if you have it), and place salmon on top. Sprinkle with salt, a film of olive oil, and the chopped herbs. Depending on thickness, bake for 18 to 20 minutes, or until cooked through, and then cooled.

Place the pea shoots, watercress or baby lettuce greens in a large, wide bowl or platter, with enough room to show off the toppings. Gently mix in the red cabbage or radicchio, yellow pepper, cucumber, carrot, white beans, and red onion.

Make the dressing by whisking together the lemon juice, honey, Dijon, garlic, herbs, olive oil, and salt and pepper in a Mason jar. Shake well. If you make ahead, save the avocado and dice at serving time.

Just before serving, break up the salmon and gently mix into the salad. Top with diced avocado. Pass the dressing at the table and let each guest spoon or pour on their own.

Mix the kale, cabbage, and carrots in a wide bowl or platter. Dice the apple and drizzle with a squeeze of lemon juice to keep from browning. Add to the salad.

Prepare the edamame beans (which come precooked) by placing them in a colander and pouring a kettle of boiling water over them. Let cool. Add to salad, along with the cranberries.

Make the dressing in a small bowl or jelly jar, by whisking together the vinegar, honey, shallot, and olive oil. Season with salt. Just before serving, add the dressing and mix well. Toss with the sunflower seeds or sliced almonds. (Only mix the portion of the salad you will be eating that day.) 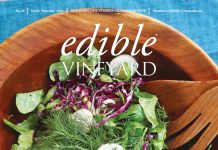 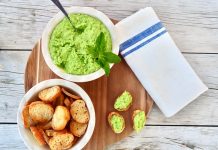 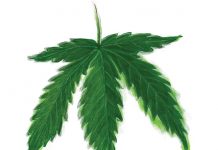