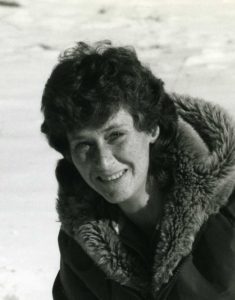 Suzanne, or Suzie, as her friends called her, was born on Oct. 19, 1945, at the Martha’s Vineyard Hospital. Her parents were Regina McLaughlin Fischer of Fort Kent, Maine, and Albert O. Fischer Jr. of Vineyard Haven.

Suzie was the third of four children, Douglas, Marie, Suzie, and Albert, who were raised on Keith’s Farm in Chilmark. She had an independent spirit that started out at the young age of 2, when she would climb out of her crib before anyone else was awake, and walk out to the barn to check the animals.

That independent spirit followed her through her teenage years, when she would drive around on her motorcycle dressed only in her bikini. She was also daring enough to swim out to the Menemsha bell buoy.

She graduated from Martha’s Vineyard Regional High School with the class of 1964. Soon after, she fell in love with John H. Bunker from Oak Bluffs. They were married on Oct. 21, 1966, and they raised their three children, Rodney, John, and Erica, on North Road in the neighborhood known as North Bend.

Suzanne was a hardworking, devoted mother and wife who always found activities for her family, such as going to the beach, fishing on Dutcher Dock for squid and mackerel, picking blueberries, and “bottle dumping.”

Suzie was self-employed, with a house cleaning business called S&M House Cleaning, named after her and her friend Molly Carroll. They had many clients on the Island, particularly up-Island, but she always made time to bring her children and their friends to the beach most afternoons. She was an avid gardener and sunbather, and enjoyed evenings in Menemsha where friends would gather to watch their children play.

She is survived by her two sons, Rodney H. Bunker, his wife Pamela, and their two daughters Samantha and Emma, John H. Bunker Jr., his partner Lynlee Gale, their son Sebastian, and his daughter Halley. She was predeceased by her daughter Erica M. Ponte, and survived by her son-in-law Kenneth Ponte and his three children, Hunter, Shelby, and Jake. She also is survived by her dearly beloved sister and two brothers, Marie Scott, Douglas, and Albert Fischer, and their spouses, as well as 12 nephews and nieces, and their children. Suzanne Bunker will be sorely missed by her friends and family.

For anyone who wishes to attend her funeral, it will be held on Sunday, August 23, at 1 pm at the Abel’s Hill Cemetery in Chilmark. Donations may be made to St. Jude Children’s Research Hospital, 501 St. Jude Place, Memphis, TN 38105-9959.

A Tisbury Police officer allegedly made a racist comment to members of the family who own Ackee Tree Caribbean American Grocery on Beach Road. The comment was made to employees of the store after police responded to a racially charged dispute outside that business last week.
#mvtimes #News #marthasvineyard ... See MoreSee Less

EduComp in Vineyard Haven is closing down after serving the Island community for the past 40 years.
#coronavirus #mvtimes #News #marthasvineyard ... See MoreSee Less

A home in Oak Bluffs owned by a man who supports the Trump/Pence ticket recently had a window broken by a BB and a political sign vandalized by undetermined means.
#mvtimes #News #marthasvineyard ... See MoreSee Less