Hugh C. Crall, of Oak Bluffs, and Bradenton, Fla., passed away peacefully on Monday, Sept. 21, 2020, in Boston. He was 86. A beloved husband, father, grandfather and friend, Hugh was known for his devotion to his wife of 64 years, Jeannine, love of family, kindness to those in need, and unmatched determination to take on any challenge. 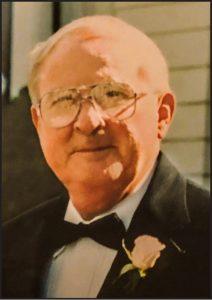 Hugh grew up in Watervliet, N.Y., and attended Rensselaer Polytechnic Institute, earning a B.S. in chemical engineering in 1956. He began his career with Union Carbide Corp. in Niagara Falls, and moved to Massachusetts, where Foster Grant saw his promise and sent him to law school. A degree from night school at Suffolk University translated into a decades-long career with American Hoechst and Hoechst Celanese as a patent lawyer. Admitted to multiple federal courts including the U.S. Supreme Court, Hugh’s practice required extensive international travel to Europe, Asia, and South America. Ultimately, his most treasured time was that with family and friends.

Hugh was never afraid of any projects — tackling a renovation with his dad George after work. He also managed to build a plane, earn his instrument rating as a pilot, and raise three daughters. He loved hunting with his Irish setters, taking long fishing trips, camping, boating, and clamming on Martha’s Vineyard.

Retirement brought a new chapter, where Hugh dove into countless projects for family and friends, but moreover was a loyal friend and eager to help his neighbors.

Although services will be private, the family will host a celebration of our Hugh’s life in the summer of 2021. In lieu of flowers, donations may be made to St. Jude Children’s Research Hospital, 501 St. Jude Place, Memphis, TN 38105.

Visit parkerbrosmemorial.com to leave a message of sympathy for the Crall family.

Too many unanswered questions on field