My first experience with edible wild mushrooms on Martha’s Vineyard was several decades ago, before I had moved here year-round. My husband and I were visiting a friend who had a hilltop house in Menemsha with a large lawn sloping down toward the harbor. One evening, she appeared with a basketful of white, stemmed mushrooms that she’d picked in her yard and said we were in for a treat. I balked at the idea of eating some random wild fungus, but she assured me that it wasn’t random; it was a meadow mushroom (Agaricus campestris), and she’d been picking and enjoying it for years. We had it with dinner, sautéed, and it was delicious.

Fast forward to sometime in the early 2000s, when two houseguests returned from a walk in the woods to report that they’d seen the most extraordinary fungus. It was white, nearly a foot in diameter, and looked like coral. Did I happen to have a mushroom book in which they could look it up? I did, and we found it: Sparassis crispa, or eastern cauliflower mushroom. To our surprise, my National Audubon Society Field Guide to North American Mushrooms labeled it “choice” – the highest edibility rating. It also noted that “nothing known to be poisonous even remotely resembles this Elizabethan ruff of a mushroom.” Out we went to pick it. It required some careful cleaning, as bits of leaf and dirt and the occasional bug were lodged in its crevices, but it was worth the work. Sauteed with a little olive oil and salt, it had a nice, chewy consistency (kind of like a piece of kelp) and a mild but very pleasant mushroomy flavor.

My mushroom field guide has gotten a lot of use since that day, and my husband and I have added almost a dozen local wild mushrooms to our diets. Many more varieties found on-Island are edible, even choice, but we restrict ourselves to the ones that can’t be mistaken for anything dangerous. Hence, for example, we happily consume black trumpets (Craterellus fallax, oddly sometimes called “Trumpets of Death”), but we won’t go near their close cousins, chanterelles (Cantharellus cibarius), because the latter have a poisonous and almost indistinguishable look-alike, the Jack O’Lantern.

Finding wild mushrooms requires a good eye and a bit of knowledge about where and when specific types of mushrooms like to grow. Fortunately for the amateur mycologist, mushrooms are a sort of perennial. In point of fact, the mushrooms we eat are the fruit of the plant, the largest part of which, known as the mycelium, is a network of branching, thread-like structures that grow mostly underground. Readers who have seen the movie “Fantastic Fungi” will recall that mycelia are literally everywhere underfoot. They play a key role in decomposition, improve other plants’ ability to absorb water and nutrients, and even enable trees to “talk” to one another.

But we are concerned here with mushrooms — the mycelium’s “fruit.” Mushrooms often fruit on or near a plentiful food source such as a rotting log. For a couple of years, some discarded wooden planks near our house produced a plethora of delectable gem-studded puffballs (Lycoperdon perlatum), but sadly, they stopped reappearing once the planks disintegrated. Edible puffballs are my personal favorites of the wild mushrooms; they have a wonderful umami flavor and a soft, light, almost melt-in-your-mouth consistency. My husband once found a football-sized giant puffball (Calvatia gigantea) in a field in Chilmark. We sliced it in half-inch slabs and sauteed them in butter and salt; the result was crispy on the outside with a texture like Wonder Bread on the inside, the whole thing infused with a truffly flavor to die for.

When mushrooms are growing on or at the base of trees, it’s generally a sign that the tree is in trouble. A friend of mine has an enormous beech on her Vineyard Haven property that annually produces dozens of large oyster mushrooms (Pleurotus ostreatus) on a notably deteriorating part of its trunk – great news for mushroom hunters, but not such happy news for the tree, which experts have confirmed is not long for this world. My once-favorite spot for finding hen-of-the-woods mushrooms (Grifola frondosa, also known in English as sheep’s head or ram’s head mushrooms) was at the base of an old oak by a dirt road. For years, every September, I’d collect five or six separate clusters, each weighing several pounds. Then, two winters ago, a Nor’easter blew the whole tree over, and lo and behold, the tree – which looked perfectly normal from the outside – was hollowed out by rot on the inside. Tragically, someone removed the tree’s stump, which disrupted the mycelium (and removed its nourishment), and it hasn’t bloomed since.

If you’re lucky enough to find a mature hen-of-the-woods, chances are that it will be quite large. My husband and Clarissa Allen of the Allen Farm once found one (while out on horseback somewhere in Chilmark) that weighed 16 pounds. The half my husband brought home was too big for my arms to encircle. We ate it in everything for a week – mushroom scrambled eggs, mushroom soup, mushroom risotto, chicken with mushroom sauce – and I dried about half of it for later use. Drying this particular type of mushroom is laborious. It must be cleaned, which means removing colonies of pill bugs, pill bug poop, stems, leaves, and other detritus that gets caught between the lobes of this flower-like mushroom. To achieve uniform drying, you must make sure, when you break the mushroom into florets, that the section of stem attached to each lobe is about the same thickness as the lobe itself, and you want all the florets to be as consistent in thickness as possible. If the weather isn’t humid, you can just lay the florets out flat on a baking sheet (or several) and leave them to air dry. If it’s humid out, or if you prefer faster drying, you can place them in an oven turned to its very lowest possible temperature, and leave them there until they’re dry – being careful not to actually cook them, or dry them too much. I have had a couple of batches come out as mushroom chips, rather than dried mushrooms I could later reconstitute. The chips were tasty, but not what I was aiming for.

One of the easiest wild mushrooms to spot on Martha’s Vineyard is the chicken mushroom, notable for its bright orange color when at its prime. Like hen-of the woods, chicken mushrooms are often multi-lobed and quite large, and they tend to grow on the trunks or at the base of old trees, or on rotting fallen logs. Whereas hen-of-the-woods are tender and edible in their entirety, chicken mushrooms become woody the closer you get to their stem; generally, only the outer edges of their lobes are tender. But they’re delicious. My first taste of chicken mushroom was prepared for me by Polly Murphy, wife of the late Vineyard artist Stan Murphy. She cooked them as I have subsequently cooked most wild mushrooms – simply sauteed in butter or olive oil, with a little salt – a method designed to allow the mushroom to shine on its own.

A subtler, but more ubiquitous edible Vineyard mushroom is the honey mushroom (Armillariella mellea). These honey-brown, capped mushrooms grow in large clusters just about anywhere. They’re near-rampant in the fall in the Hebrew Cemetery in Vineyard Haven, for example. My Field Guide describes their edibility as “Choice, with caution.” Translation: they are yummy, but they give some people (myself included) stomach aches if they’re simply sauteed. Parboiling them briefly before sauteeing diminishes their flavor a bit, but stops them from causing bellyaches.

The best time to find mushrooms is after a good rain. Some common wild mushrooms, such as hen-of-the-woods, bloom in fall, but several others (puffballs and chicken mushrooms, for example) can be found in the summertime as well. Just remember when and where you find them, as they’re likely to turn up in the same spot, at roughly the same time, year-after-year.

Of course, it is never advisable to eat any mushroom unless you are 100% certain that it won’t kill you. As delicious as our friend’s meadow mushrooms were all those years ago, I never collect anything white-capped on a stem, since there are many inedible and even deadly look-alikes. Almost all boletes (stemmed mushrooms with a spongy, rather than gilled, underside) are edible, and some are choice; but there is at least one common poisonous variety on Martha’s Vineyard, so I do serious research before cooking and eating them. Many on-line sites can help you identify mushrooms and determine whether or not they’re safe to eat, but I find my hard-copy Audubon field guide indispensable.

Remember that mushrooms, like other fruits, grow in stages and eventually decline and rot. You can eat an immature hen-of-the-woods, but — as with a cucumber or a zucchini — if you wait a couple of days, it will more than double in size, and you’ll have much more of it to enjoy. Wait too long, though, and it will be over-the-hill — a bit mushy and/or slimy around the edges, which rather diminishes its appeal. Chicken mushrooms, once they’ve lost their bright orange color and turned beige, are too far gone and will be woody and relatively tasteless. If puffballs’ insides are firm and white, they’re ready to eat; if they’re getting squishy and yellowish inside, they’re past their prime.

I’ve been a collector since I was a little girl who loved hunting for sea glass and shells on the beach; foraging for mushrooms satisfies the same urge to find “treasures”, and as an added bonus, I get to eat them. The only drawback is that I find, when I’m hiking in beautiful places in the fall, I have to remind myself to stop looking down, my eyes darting from base of one tree to another, and look up. The views on this Island are “collectable” too.

Food that makes you feel good 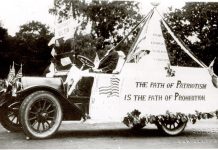 Let’s raise a glass to Prohibition