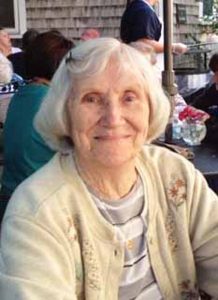 Kathleen Marie Ryan lived a long and rich life, marked by her deep love for family and friends. She was born in Manhattan, New York, on August 19, 1928. Her family settled in a home on Edison Street in Grant City, Staten Island, New York.

Kathleen was the second of 11 children born to Irish immigrants Thomas and Ellen Ryan. Her 10 siblings, all male, affectionately called her “Sis,” a nickname she carried for the remainder of her life. She is survived by brothers Thomas, Jeremiah (“Jerry”), Patrick, James, Martin, Robert, and Kevin. She was preceded in death by brothers Denis, John, and Joseph.

Upon graduation from Notre Dame Academy on Staten Island, she worked supporting Catholic Charities in Manhattan. Throughout her life, aside from raising her own large family, Kathleen was always available to assist others. She generously volunteered her efforts to service organizations such as Meals on Wheels, local hospice groups, Mount Loretto orphanage, the League of Women Voters, and her local Catholic parish. In leisure times Kathleen was an avid reader and a master of word games (NYT crossword puzzle in ink!) and bridge. She loved hosting her large family for card games and social events.

Kathleen married Richard (“Dick”) Joseph Mackey on Staten Island on June 11, 1949. They had five children, Brian, Denis, Richard, George, and Janice. In early years the family lived in Charlotte, N.C., and Macon, Ga., before returning to Staten Island and settling in Tottenville in 1956. As their children grew and left the house, Kathleen and Dick moved to upstate New York, and finally retired to Toms River, N.J., in 1990.

Kathleen and Dick entered the Windemere Nursing and Rehabilitation Center in Martha’s Vineyard in 2011. Dick passed in 2012, while Kathleen remained at Windemere, and received loving hospice care in the last month.

Another, cheaper bus service to airports?

Struggle to find help is real