Roy Gundersen, beloved husband, father, and grandfather, died peacefully at his Edgartown home on Nov. 25, 2020, at the age of 89. 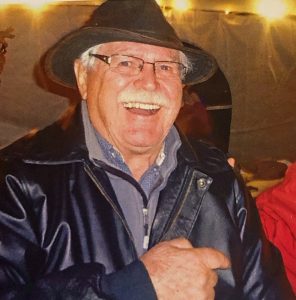 Roy grew up in a close-knit Norwegian community in East Hartland, Conn., and his first language was Norwegian. In his youth, he spent hours with his dog Lucky exploring the beautiful woods. Then when he was 10, his sister Diane came into his life. He loved listening to her play the piano, and together they created a lifetime of fun and loving memories. In Hartland, he was surrounded by tantes, uncles, cousins, and friends who often gathered at the fields for ball games, or at the Pedersen farm or the Lutheran Church. It was at the farm that he often played with his cousins, drove tractors, and baled hay. Tante Aasine was always busy serving food, and baking breads and pies. Roy returned each year to the town of his youth, keeping in touch with the Gundersens, Pedersens, Dalenes, Haags, and friends.

During the Korean War, Roy served as boatswain’s mate aboard the destroyer USS Newman K. Perry. He developed a deep love of the sea. During this time he met and married his first love, Lorraine Jacobsen. He experienced a great loss at 29 when she passed away. Later, in 1962, he met Dorothy Pierce, and they married in 1963 and honeymooned in Paris, skied in Zermat, Switzerland, and spent time with family and friends in Norway. After only six weeks of marriage, Roy was faced with losing his wife, as she battled a raging fever for weeks, and was hospitalized with an unknown illness. While driving home one evening from the hospital, he heard a broadcast about an epidemic in the small village where they had skied in Switzerland. Elated, he called the doctors to let them know it was typhoid fever. He knew they would have a future and share many memories together.

In 1965, Gert and Al Lilliendahl introduced the Vineyard to the Gundersen family. And in 1966 the Gundersens returned with their son Kevin, infant son Jeffrey and his inseparable father Mathias, known to all as Pop. Roy embraced the Vineyard community. The Vineyard was his paradise. He joined the Edgartown Fire Department, was the head of Civil Defense, coached baseball, served on the board of the Council of Aging, and volunteered at the Martha’s Vineyard Hospital.

Roy and Pop worked as carpenters side by side, starting and ending their day together. Roy’s passion for building was piqued when studying the architectural drawings and the delivery of a stack of lumber. He imagined the prospect of what would be, and the excitement of the transformation into his clients’ dreams. With the last rafter hung and the decorated wreath on the gable end, it was a time to celebrate. The owners invited family, neighbors, friends, and their contractors. A toast with aquavit was made, and a signing of the drawings by all in attendance followed, with an abundance of food.

With friend Glenn Provost, he spent 10 years building a 42-foot ketch named Northern Lights. More than 40 showed up for that one day to pour the hull. When the boat was completed and rigged, Captain Gunner, First Mate Dottie, his father Mathias, Engineer Kevin, and Navigator Jeffrey, navigator plus Lucky the beagle and Horatio Hornblower the cat, set sail on an adventurous voyage to the Caribbean. It was truly a success, as all hands onboard signed on for the next cruise.

Always a dreamer, Roy loved to draw, carve, and paint, and he wrote stories. He enjoyed skiing, sailing, and bringing others together. He’d take a few men aboard for a weekend cruise to Nantucket that would long be talked about and long remembered. Each year he celebrated his 50th birthday. This year he celebrated his annual 50th birthday for the 40th time. They were memorable occasions. Highlights like taking first place with the guys in Owen Park while racing model sailboats, while rare, put a twinkle in his eye. Fridays he would meet with friends by the harbor to keep in touch. He loved attending his grandchildren’s lacrosse and ice hockey games.

Roy shared his personal philosophy, and practiced meditation. Some say it helped as he moved windows, walls, bathrooms, and stairs. Others thought he would reach sainthood. Roy embraced life with joy and love. His smile was both genuine and infectious, and he will be long remembered for his laughter, his kindness, and his generosity.

Roy was the beloved husband of Dorothy (“Dottie”), his wife of 57 years. He was the proud father of his dearly loved sons Kevin and wife Pia and son Jeffrey and partner Jill Brockley. He was the loving grandfather, farfar, of Jacob, Elias, and Ingrid. He is survived by his beloved sister Diane and husband Dr. Richard Lindgren; sister-in-law Elizabeth and husband William Richter; brother-in-law James Pierce and wife Patricia. He leaves nephews Stephen Skelly, Pastor Kurt Skelly, Christopher Richter, Jeffy Riker, and Leo Riker.

A celebration of his life is planned for next fall.