Mannie Mass of Floral Park, N.Y., passed away peacefully, early on Friday morning, May 7, 2021. He was almost amazingly 102 years old. 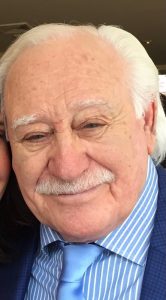 Mannie was born in Brooklyn, N.Y., in 1919 to Max and Sophie Masnikoff. He moved to Roslyn, Long Island, to raise his family of three sons, with his precious wife Della, whom he cherished.

He served proudly and honorably in the military in World War II in the Philippines, and always revered those days.

He was an athlete in his younger days, and grew into a successful businessman, owning his own roofing company in Manhattan. He was devoted to his family and his Judaic culture, and always emphasized strong family bonds. He was the president of his temple’s men’s club. He enjoyed traveling, especially cruises. His amazing longevity gave him an extraordinarily full life; in his words, “he had a great life and great family, and says goodbye.”

Mannie’s sons Norman and Scott and family discovered Martha’s Vineyard in the early 1980s and started vacationing there every summer. Scott proceeded to start working on the Vineyard, commuting from Woodstock, N.Y. Eventually Scott’s daughter, Aela, who grew up summering on the Vineyard, became a full-time resident with her wife Sara, and now two beautiful children.

Mannie was predeceased by his dear wife Della in February 2020, and son Norman in 2004 .

He is survived by his large loving family; his sister Sylvia Schechter, sons Scott and Michael and their spouses Susan and Sari; 11 grandchildren and 21 great-grandchildren who all loved him dearly; as well as being a beloved uncle.