Tisbury’s select board announced the approval of a new three-year collective bargaining agreement with the police union, Local 419. The agreement, which reportedly grants 1.4 to 2 percent compensation increases, was forged in executive session earlier Tuesday. The board also deliberated aspects of the town’s plastic bottle bylaw that came into effect May, 2021. Select board chair Jeff Kristal noted the new police union agreement contained tidied up language and a negotiated cost of living allowance (COLA).

Kristal said the “professionalism exhibited by the police union side was duly noted and the town and everybody would like to thank everyone in their efforts.”

In a text message to The Times after the meeting, Officer Charles Duquette, vice president of Local 419, waxed positively about negotiations. “The union is thankful, and excited to continue an open line of communication with the town government,” Duquette messaged. “COVID-19 threw a wrench in our routine, but we are ready to use this momentum and build a solid foundation going forward.”

Asked about the COLA provision, Duquette messaged, “We compromised and matched the town’s COLA for the first year. Going forward we are sure that our COLA adjustment is on par with what we need it to be.” According to Duquette, officers will receive a 1.4 percent increase in 2022 and 2 percent increases in 2023 and 2024.

On Wednesday, Acting Chief Habekost, who as a sergeant had previously been part of the union negotiations, said: “It’s a little bit less than the last contract cycle.”

Grande outlined for the board how the town ensures compliance with the plastic bottle bylaw.

“The way we enforce it is through our inspectional services department when they do the annual inspections and other inspections for different restaurants and establishments,” Grande said. Compliance is also examined through the common victualer licensing process, Grande said. License application language has been updated to include the plastic bottle bylaw. Grande mentioned that a “number of businesses” have old plastic water bottle inventory.

Kristal said post-Labor Day enforcement of the bylaw through license renewal language was an appropriate method of handling businesses still not in compliance.

Gomez noted the bylaw is meant to restrict the sale of plastic bottles and doesn’t prevent the use of plastic water bottles. He took issue with a Times image that captured him and fellow select board members with plastic bottles at hand. Gomez said he wasn’t selling or distributing the bottle “but I still can use it. Am I correct in that understanding?”

“It’s not a prohibition,” Grande said.

People traveling to the Island may bring plastic water bottles with them, select board member Roy Cutrer said, “and there’s nothing we can do about that.”

Kristal said offering those folks a “real water bottle” and access to a refill station would help curb that practice.

In other business, the board unanimously approved a raft of one day liquor licenses including one for a concert to be hosted by Brook Katzen, a “Soul of Sonoma” wine event in downtown Vineyard Haven, and several events at the Martha’s Vineyard Museum including its annual gala.
The board also unanimously appointed Fala Freeman to the board of assessors and reappointed Reade Milne as alternate building commissioner. 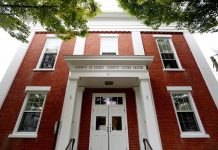