In the ten years since I planted two Rainier cherry trees in my West Tisbury back yard, the trees have grown and thrived, and I’ve managed to pick and eat maybe two of their delectable fruits. This is because my non-human neighbors — mainly birds and raccoons — find them irresistible and don’t mind eating them a few days before they reach their plumpest, sweetest, ripest best. It’s become clear that I need to follow the lead of Jesse Ausubel, a renowned environmental scientist who has six cherry trees on his two-acre Norris Avenue property in Oak Bluffs.

The trick, Jesse says, is to grow sour cherries, which birds do eat, but which they appear to be willing to share. Jesse, too, doesn’t mind sharing. “Bluebirds and cardinals love cherries,” he notes, “and how can you not like bluebirds and cardinals?” So he looks the other way when they devour all of the fruit on his sweet Bing cherry trees, and instead focuses on his Montmorency cherries, a light red variety of sour cherry grown in Europe, Canada, and — since at least the early 20th century — the United States.

With the Montmorency cherries, Jesse observes, the birds tend to eat from the top, leaving the trees’ lower and inner-growing cherries for human harvest. Jesse uses them to make pies and preserves. (Elsewhere, sour cherries are also used for juice and sold dried.) Generally, Jesse harvests enough cherries to freeze several pounds for later use, and he often gives away surplus fruit to friends and neighbors, including Hal Ryerson, chef-owner of the Sweet Life Café, who, Jesse says, “makes fantastic cherry desserts.”

When Jesse bought his Oak Bluffs property in the fall of 1990, he wasn’t thinking about fruit from trees, but about fruit from the sea — fish, scallops, clams, oysters. But in the spring of 1991, he found his backyard awash in the blossoms of ten or so apple, peach, and cherry trees that the previous owners had planted. “I thought, ‘Oh my God, this is so beautiful!’” And a future orchardist was born. Planting a few trees every year, Jesse now has an orchard of some 40 trees, including apples, pears, cherries, peaches, mulberries, quince, persimmons, and — the most recent addition — a pomegranate.

Farming has a history in Jesse’s neighborhood. In the 19th and early 20th centuries (the oldest part of Jesse’s house dates to the 1860s), the area was largely owned by De Bettencourts and Alleys, many of whom had small, 3-6 acre farms where they grew vegetables, maybe had some chickens and a cow or a few sheep, while also working as fishermen, tailors, smiths, cobblers. The settlers of English and Portuguese stock, Jesse notes, came from cultures fond of vines and fruit. “Even when I was a summer Vineyard resident in my childhood,” Jesse recalls, “every old house in this area had an apple tree.”

While there are busy periods in orchard maintenance, particularly at harvest time, Jesse notes that growing fruit trees is far less labor-intensive than growing vegetables. Once a tree is planted, it will produce fruit for years, with no more planting required, and little in the way of weeding. Trees — being vertical growers — also produce a good deal of food for the small amount of real estate they require. The major maintenance activity is pruning; if fruit trees grow too tall, it becomes challenging to harvest the fruit. But even with pruning, Jesse says, “trees are very forgiving.” Pruning is generally done between October and April, and it can be done at any point during that period, after the sap has fallen and before it rises again in the spring. Some fruit tree owners spray to deter insects and diseases — a process that takes a few hours at most and might be done twice a season.

The hardest task, emotionally, is removing a tree. Inevitably, some trees are damaged beyond repair by storms, or done in by diseases. Additionally, some kinds of fruit trees stop producing fruit when they get old. But, of course, removing a dead or unproductive tree makes room for a new one.

In May when Jesse’s orchard flowers, he likes to take a chair outside and sit beneath the trees. “A blooming fruit tree is just so beautiful,” he says. “I like to sit and contemplate the blossoms.”

At harvest time, he generally goes out early in the morning to pick. He likes to play music while he harvests, matching the music to the fruit he’s picking. For picking cherries (which tend to peak in early July, just in time for July 4th  cherry pies), he listens to the French singer Edith Piaf, pairing her vocals with the Montmorency cherries named for a region of France near Paris. “It’s the emotion of Piaf’s singing, the love, the cerises,” says Jesse — so well-suited to his blood-red, heart-shaped fruits. “When Edith Piaf is singing, I can pick cherries forever.”

On the day the cherries peaked on Jesse Ausubel’s trees in July, Jesse called Hal Ryerson, chef and co-owner of the Sweet Life Cafe, in Oak Bluffs. “Come over and pick some cherries!” he told him. Happily, he invited Edible Vineyard along. Hal showed up with his 5-year-old daughter, Loretta, and scooped up the bountiful fruit.

Within a few hours, diners at the Sweet Life could order this polenta cake, in a recipe developed by Sweet Life pastry chef Ellie Wallock.

Preheat oven to 350º. Prep your 9-inch baking pan using pan spray, and then coat with flour, tapping out excess flour. In a medium-size bowl, sift the four dry ingredients together and set aside. In a larger bowl, whisk together eggs, sugar and honey. Then stream in the oil and butter.

Alternate whisking in the dry ingredients and the milk. Be sure to not overmix, or your cake will be very dense.

Pour into your prepared baking pan, bake for about 20 to 30 minutes, or until a cake tester comes out clean.

Bring a medium pot of water to a boil, then turn down to a simmer.

In a glass or metal bowl, whisk together eggs, sugar, and lime juice. Place the bowl on top of the simmering pot, creating a double boiler. Whisk constantly for about 8 to 10 minutes, until it becomes very thick. Take off the heat, add cubes of butter and pinch of salt. Whisk until all the butter is incorporated.

Strain with a fine mesh strainer, and chill in the refrigerator until completely cold and set.

In a medium pot, put cherries, cherry juice (or water), and sugar, and bring to a boil. Turn heat down, and simmer for about 8 to 10 minutes, until the cherries break down a little bit.

Make a slurry with the cornstarch (put cornstarch in a small bowl, mix in about 2 tablespoons of water until it is dissolved and fluid), add into the cherry mixture, and boil it for a couple minutes to get out the starchy taste, stirring constantly. Take off heat, add a pinch of salt and lemon juice. Let cool to room temperature, and then chill in the refrigerator.

Mix all ingredients together and mix with a handheld mixer, or a KitchenAid with the whisk attachment, until you get soft peaks.

Put a large spoonful of the lime curd on each plate. Next, put a piece of the polenta cake on top of it. Spoon a good amount of cherry compote over the polenta cake, letting some of it drip down onto the plate. To finish, put a dollop of the whipped mascarpone on the top. Enjoy! 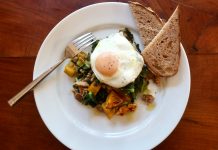 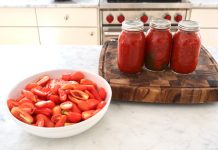