On Friday, August 6, 2021, Spencer Huntington Nitchie of Baltimore, Md., died after a short illness. He was 57, a musician, father, husband, brother, son, and loving friend to many. He was widely known as an exponent of Maryland’s Irish traditional music community, and was respected for his expertise on the tenor banjo, Irish flute, fiddle, concertina, and guitar. 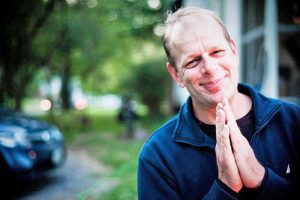 Spencer was born on Martha’s Vineyard on Dec. 17, 1963, the youngest of three children. His parents, Hubbard and Nancy Nitchie, worked as teachers in Annapolis, Md., where for many years they published Banjo Newsletter, a monthly magazine covering all aspects of the five-string banjo.

Spencer grew up in Annapolis, and spent summers in Chilmark. As a teenager, he learned to play the flute, guitar, and five-string banjo. He worked at Poole’s Fish Market in Menemsha, and later learned carpentry skills from island craftsmen, skills which he continued to hone throughout his life.

After attending Towson State College, Spencer traveled to Europe with his guitar in 1984. Learning languages as he traveled, he played music on the streets of London, Paris, Nice, Florence, Athens, and other cities. He returned to the States with Silvia Breida of Revigliasco, Italy. The couple soon had a daughter, Sofia Huntington Nitchie, born while they were living on Martha’s Vineyard.

When Silvia died in 1990, Spencer proudly took on the role of single parent to his spirited daughter. For many years, Spencer received both Father’s Day and Mother’s Day cards, handmade by Sofia.

After Hub Nitchie’s death in 1992, Spencer and his older brother, Donald, carried on Banjo Newsletter. They increased its subscribership, and developed digital content that paralleled the print magazine Spencer published from his home office in Eastport, Md. As publisher, Spencer was the organizing force for circulation and mailing. He became a resource to subscribers as he diligently responded to their queries: He was the voice on the phone.

Spencer fell in love with Irish traditional music in the 1990s. He adapted his familiarity with the five-string banjo to the tenor banjo, and amassed a seemingly endless repertoire of jigs, reels, hornpipes, polkas, slides, marches, slip jigs, and barn dances. He had a gift for variation, and was astute enough to learn a melody after hearing it only a few times. For many years, he graced Irish traditional music sessions in Baltimore and Washington, D.C., but his greatest contribution was made in Annapolis, where he hosted sessions at Sean Donnellan’s, Fadó, Castlebay, and most recently, Galway Bay. For the past 11 years, Spencer had the joy of a loving partnership with Tara Boyle. They joined hearts and families at a lovely wedding in 2018 on Martha’s Vineyard.

On the evening after his death, Spencer was mourned by notable Irish traditional musicians at the Baltimore home he shared with Tara. Another musical event occurred a few days later at Galway Bay in Annapolis, where friends gathered to recall cherished memories of Spencer, his musicianship, and his good character. A memorial to celebrate Spencer is being planned for a future date.

Spencer is survived by his mother, Nancy Nitchie of Oak Bluffs; his aunt, Jane Huntington of Parkville, Md.; his wife, Tara Boyle of Lauraville, Md.; his daughter, Sofia Nitchie of Madison, Wis.; his stepdaughter, Maeve Boyle of Ardmore, Pa.; his brother, Donald Nitchie and wife Elizabeth Parker Nitchie of Chilmark, their son Nigel Smith and his wife Danielle of Forestdale, and their son Tucker Smith and his daughter Annie of West Tisbury; his sister, Emily Meegan and husband Billy Meegan, and their children Jake and Delilah Meegan, all of Chilmark. He is also survived by the musicians in whom he invested the gifts of his genius and his warm friendship.