After a long battle with breast cancer, Diane M. Becker, Sc.D., MPH, R.N., an expert in the prevention and management of coronary artery disease, passed away peacefully at home in Baltimore, Md., on Nov. 17, 2021, with family at her side. She was 78. 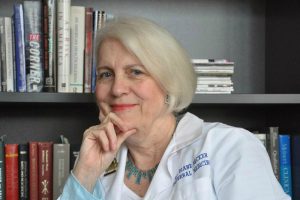 Diane and her husband of 57 years, Lew, a cardiologist at Johns Hopkins School of Medicine, were longtime seasonal residents of Martha’s Vineyard. They first came to the Vineyard in 1985, and fell in love with the Island. They purchased a home in Lambert’s Cove in 1990, for which they made improvements over the years, and created beautiful gardens according to Diane’s impeccable vision.

Diane was born in Warwick, N.Y., on March 27, 1943, the daughter of Lucile Swartwout and John Smith Demarest of Greenwood Lake, N.Y. She was a 1964 graduate of the Johns Hopkins Hospital School of Nursing, followed by 17 years as the nursing director of intensive care units in London, Boston, and Chapel Hill, N.C. Compelled by a desire to address the public health of the communities she served, she completed both an MPH and a doctoral degree at the Johns Hopkins School of Public Health. She joined the faculty of the Johns Hopkins School of Medicine in 1984, and became nationally recognized as an expert in coronary disease risk factors and lipid disorders. Working closely with her husband, she founded the Johns Hopkins Sibling and Family Heart Study (now known as GeneSTAR), a family study of genetic and lifestyle risk factors for early heart attacks, with over 4,000 participants from two generations now followed for over 35 years. It is the only family study of its kind in the country.

Dr. Becker was a creative and visionary health professional, partnering with pastors from 250 East Baltimore churches to form the awardwinning Heart, Body, and Soul, Inc., an independent nonprofit organization designed to create real-world healthcare delivery alternatives in inner-city African American communities. Working closely with CURE, Clergy United for Renewal in East Baltimore, Dr. Becker was a pioneer in community medicine, and was known for her work to improve opportunities for community members to enter health careers. In her 60 years at Johns Hopkins, her work to reduce health disparities was recognized with numerous national awards.

In 1995, she was awarded a prestigious Robert Wood Johnson Health Policy Fellowship, and served on the U.S. Senate Committee for Medicare and Low-Income Families. She was a sought-after mentor of medical students, postdoctoral fellows, and junior faculty, and directed a unique federal health policy clerkship in which Hopkins medical students were placed in congressional or executive offices in Washington, D.C.

In 2004, Dr. Becker and her Vineyard colleague, Dr. Charles Silberstein, designed and carried out the Health Report of Martha’s Vineyard, a first-of-its-kind comprehensive study that surveyed more than 1,000 full-time and 700 part-time adult Island residents. The study was published in August 2006 as the “Health Conditions and Health Status Report of Martha’s Vineyard,” examining a variety of public health issues plaguing the Island community, including Lyme disease, skin cancer, depression, and excessive alcohol consumption. The report was supported by nearly every healthcare organization on the Island. The full text of the report is available on the Martha’s Vineyard Gazette website at bit.ly/HealthReportMV.

About the creation of this landmark report, Dr. Silberstein comments, “Diane worked tirelessly and led a grassroots team from 2003 to 2006 to produce the Martha’s Vineyard Health Report. It is hard to imagine a more selfless, wise, devoted, and inspiring captain of our team. She cared deeply about Martha’s Vineyard, the people who live here, and the healthcare institutions that sustain us. Diane believed that the Martha’s Vineyard Health Report was one of the most comprehensive studies of any American community’s health and healthcare assembled in the last 40 years. The findings, particularly with regard to our high rates of depression, excessive alcohol use, and Lyme disease, continue to be used and quoted locally and nationally. Without a doubt, Diane was one of the great unsung heroes of Martha’s Vineyard.

“And that was just the way she wanted it. Her style was unassuming and to give credit to her teammates, while she did a bulk of the work.”

Diane loved the Vineyard, and often called it her “spirit place.” Inspired by the beauty of the Island, she became an avid photographer of Island scenes and people, focusing on sunsets, old houses, and barns. She particularly enjoyed shooting the cranberry bog house on Lambert’s Cove Road. She was an enthusiastic supporter of Vineyard arts organizations, music and dance events, and the Vineyard Film Center. She was a passionate gardener, a lover of words and music,with a sharp wit and a creative spirit. Diane had an impressive career and life full of friends and loved ones.

Funeral services are being planned, and will be announced at a later date.

In lieu of flowers, the family is asking that tribute gifts be sent to Martha’s Vineyard Community Services (mvcommunityservices.org). Alternatively, donations can be made to the Susan G. Komen organization, whose mission is to prevent and cure breast cancer (komen.org).