John Daniel Hawke Jr., son of Olga Buchbinder and John Daniel Hawke of Rockville Centre, N.Y., died at his home in Washington, D.C., on Jan. 3, 2022, at the age of 88, surrounded by his family. 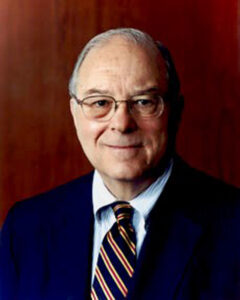 An accomplished lawyer who served in all three branches of the U.S. government, Hawke was once called “the dean of American bank lawyers” by the New York Times.

Known to most everyone as Jerry, he was a loving father and grandfather, devoted husband and brother, loyal partner and friend, confident cook, and beautiful writer. His dry wit, keen intelligence, and moral standard were evident in all he undertook.

Hawke was born in New York City on June 26, 1933, and grew up in Rockville Centre, where he attended South Side High School. As a boy, he accompanied his father, a civic leader, on his rounds as an air raid warden. A child of the Depression and the second World War, he still enjoyed a charmed childhood, taking pride in becoming an Eagle Scout and a summer camp bugler.

Hawke graduated from Yale University, and then joined the U.S. Air Force at Eglin Field, Fla., as a second lieutenant, and worked as a public information officer. He and his desk mate, Hunter S. Thompson, talked of becoming writers and debated literature. Years later, Thompson would telephone him collect in the middle of the night to inquire whether he still considered “The Great Gatsby” to be the greatest American novel.

Graduating at the top of his law school class, he was editor-in-chief of the Columbia Law Review, and a law clerk to Judge E. Barrett Prettyman on the U.S. Court of Appeals for the District of Columbia Circuit.

In the early 1960s, Hawke worked as counsel to the Select Subcommittee on Education in the House of Representatives. Staffers in Congressman Jack Shelley’s office asked him to deliver a box of sugar cookies from the Longworth House Office Building cafeteria to their colleague, Josephine Marie Reddan. He did, and he fell in love at first sight. They married on June 15, 1962, had four children, and enjoyed a wonderful life together until her death in 1991.
His Vineyard connections span nearly six decades starting in the summer of 1968, when he and his wife Marie brought their young family for a vacation up-Island, thus launching a family love affair with this beautiful Island.

Early on, during an Aquinnah stay at the home of Charles and Hatsuko Vanderhoop with regular outings to the ice cream shop Sugar and Spice, Jerry began to appreciate the history, the geology, the flora, and the birds of Martha’s Vineyard. He subscribed to the Dukes County Intelligencer for more than 40 years. During their first Vineyard summers, he and Marie played tennis at the Chilmark Community Center, where their kids learned to sail and swim on Menemsha Pond and where everyone partook in the beloved weekly square dances called by Edward Chalif. Jerry and his kids gleefully “dug for the oyster and dove for the clam,” reeled, snake-danced, and swung trunks as “elephants come out to play.” He took recorder lessons above the Chilmark Fire Station, mastering “Greensleeves” with his daughter. And he helped set up his daughters’ swap meet table in the early 1970s at the Chilmark Community Church.

The greatest family project each summer was figuring out which categories Jerry and his kids would choose to compete in at the Agricultural Fair. At Jerry’s urging, the family entered papier-mâché fruit bowls, photographs, baked goods, knitted cardigans, and needlepoint. His love of the Ag Fair was reciprocated in kind, as Jerry for many years running won blue ribbon after blue ribbon for his home-caught, handmade smoked bluefish, the recipe for which he tinkered with for years, and guarded as a state secret. (MVT Editor Nelson Sigelman wrote about him: bit.ly/MVTBlueRibbonWinner.)

Hawke practiced law at Arnold & Porter for nearly 60 years, with intervening stints in government. He established the firm’s financial institutions practice, and served as chairman of the firm from 1987 until 1995. Previously, Hawke was general counsel to the Board of Governors of the Federal Reserve System from 1975 to 1978, under Chairman Arthur Burns.

In the early 1980s, his law practice took off, attracting many of the country’s largest banks and financial institutions as clients. In 1985, Hawke argued the case Board of Governors of the Federal Reserve v. Dimension Financial Corp. before the U.S. Supreme Court, and secured an 8-0 victory. A mentor to a generation of up-and-coming banking lawyers within the law firm, he also taught banking law at Georgetown Law School and Boston University School of Law, where he was chairman of the board of advisors at the Morin Center for Banking Law Studies.

These experiences primed Hawke for two major presidential appointments at the peak of his career. President Clinton named him Undersecretary of the Treasury for Domestic Finance in 1995. He oversaw financial policy and legislation, with frequent trips to the Hill to testify, worked on the debt ceiling showdown with Congress in 1996, and helped roll out the newly redesigned $20 bill. A memorable moment was holding down the fort when the historic Treasury building caught fire in the summer of 1996, while Secretary Robert Rubin was on business abroad. When Hawke called the secretary to brief him on the fire, he said, “Bob, I have good news and bad news. The bad news is that the building is on fire. The good news is that it wasn’t the British.”

In 2001, the department bestowed its highest honor upon him — the Alexander Hamilton Award.

Hawke served as the country’s 28th comptroller of the currency (OCC) from 1998 to 2004, where he administered a network of more than 2,000 national banks, comprising more than half of the assets of the commercial banking system. He was a director of the Federal Deposit Insurance Corporation (FDIC), the Federal Financial Institutions Examination Council, and the Basel Committee on Banking Supervision.

Upon leaving the OCC, Hawke returned to Arnold & Porter, staying active until well into his 80s.

In 1991, Jerry lost his beloved wife to illness, and on Monday, Jan. 10, 2022, he was laid to rest at her side in Oak Grove Cemetery at a brief private ceremony, with veteran’s honors presided over by American Legion Post Commander Jo Ann Murphy. He will be missed dearly by his four children Daniel (Jessica Blake), Caitlin (John Kada), Anne, and Patrick; and his three grandchildren, Spencer, Camerynn, and Clare, in each of whom he instilled a deep appreciation for this incredible place as well as for bluefish, brined and smoked Jerry-style.

The family plans to convene a memorial service later this year. Gifts in his memory may be made to Island Food Pantry on Martha’s Vineyard (igimv.org/donate).