David Mercer was born on March 29, 1961, in Sausalito, Calif., to Sylvia Celeste Stewart and William (“Bill”) Mercer. He grew up in New York City. After his freshman year at the Bronx High School of Science, David took the initiative to apply to more than 30 private schools. With many acceptances to consider, he chose to attend Milton Academy in Massachusetts. 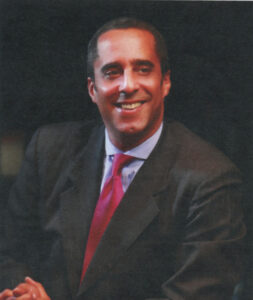 While at Milton Academy, he played varsity football and basketball, and ran track. It was there that he discovered the Grateful Dead, and became a great fan of their music. He also developed close, lifelong friends at the academy that have journeyed with him throughout his life.

As a voracious reader, David made certain that he knew the meaning of any word he came across. While at Milton, an English professor asked him the meaning of a word in front of the class. David had to admit he did not know. At that moment he promised himself it would never happen again, and it didn’t.

During his teen years, he traveled to Europe on a teen tour, and lived in Jamaica with his brother Scott and their mother Sylvia. It was experiences like these that lit his love of both travel and people.

David attended Duke University, where he immediately engaged in politics and community activism, working for independent presidential candidate John Anderson in 1980. Following his three years at Duke, David transferred to Principia College, where he earned his political science degree.

David continued to work on campaigns, including those of Rep. Joe Kennedy and presidential candidates Michael Dukakis, Bill Clinton, and Hillary Rodham Clinton. Between campaigns, David went to work in television at the Christian Science Monitor, and as a Democratic pundit on Fox News. Eventually he transitioned from political fundraising and campaigns to lobbyist and consultancy through Mercer & Associates.

David held many board positions, and guided foreign and domestic political and business leaders through Capitol Hill in an effort to make the world a better place.

David’s passion for politics and life was equal to his love of family and friends. David beamed with pride about the love and gratitude he had for his mother, Sylvia. As a single mother, she gave him endless and unconditional support. He often reflected on his traveling experiences to Europe and Jamaica, but for one highlighted summer he lived on Martha’s Vineyard with his brother Scott. It was special, unique, and highly valued. David returned to the Vineyard every year into adulthood to celebrate the many friendships he made. He was just as comfortable on Capitol Hill as on the Inkwell.

David’s love for Scott, his “Irish twin brother,” was always more than just a big brother’s love for a younger sibling. It was a love that was filled with respect, pride, support, and generosity. David was equally proud of Scott’s two sons, Jason and Brandon. He made sure that his best gift to them was his advice as they developed into fine young men.

David was a devoted son, brother, cousin, friend, and mentor who leaves behind him many to cherish his memory, including his mother, Sylvia; brother Scott; and sisters Melissa and Valerie Mercer; nephews Jason and Brandon; sister-in-law Celia Mercer; nieces Marianna Ali and Michelle Underwood; aunts Elisa Stewart and Joan Johnston, and cousins Joan Johnston, Cheryl Willois, Wendy and Heather Johnston, Page and Marc Stewart; and many others cousins and friends who affectionately called him “Super Dave” because he was larger than life to so many.

David was celebrated on Dec. 9 in Milton, and the family would like to thank those who gave an outpouring of love and kindness during this difficult time. A celebration of life is also being planned in Washington, D.C., in January.